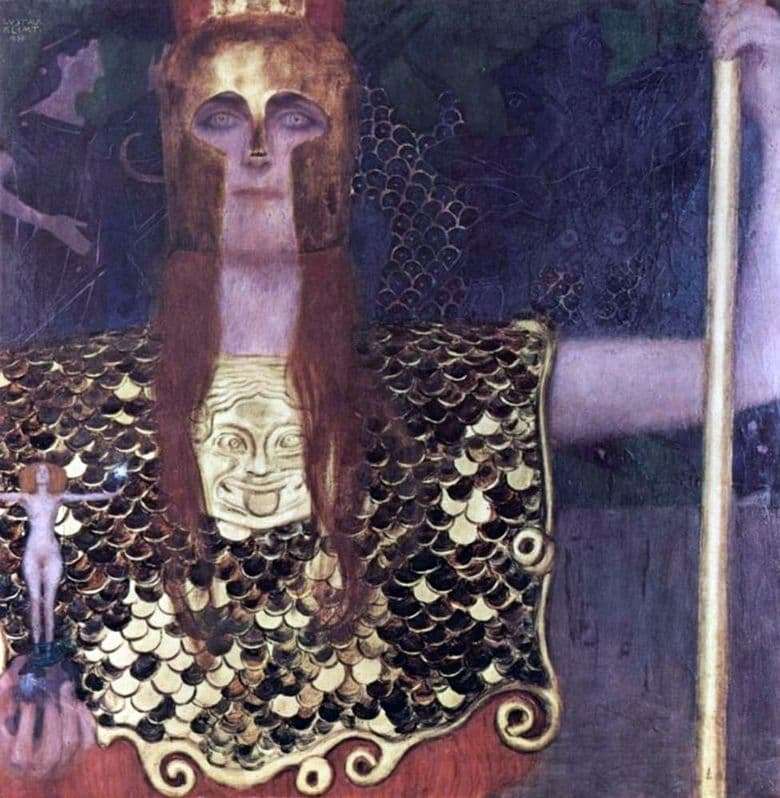 The originality of the Austrian artist Gustav Klimt lies in portraying women as the main characters of his works. In his canvases it concerns such universally significant themes as death, old age, love, depicted in expressive bright colors, mainly in gold tones. Especially spectacular on his canvases are images of powerful ladies and destructive beauties, ruling over men and bringing them death.

The gallery of superwomen begins with Athena Pallas, depicted in gold armor, hung with weapons, confident in the victory over the entire male race. Some details that first appeared on this canvas will later become of paramount importance in the future work of the master, for example, the use of noble metal and body metamorphosis into a pattern, and the ornament into flesh.

The picture on the chest depicts a woman in armor: out of the helmet, half hiding her face and head, knocked out strands of long brown hair flowing over her chest. In a bent and raised hand, she holds a metal spear, leaning slightly on it. In the other hand, the character holds the attribute of power in the form of a ball with a miniature nude female figure fixed on it. The chainmail of gold rings is decorated on the neck with a shield with satire stamped on it. It stands against the background of a wall covered with drawings of a female figure on the left side of the heroine, and to the right is a shaded drawing of a mythical animal against the background of an ornament made of rings that coincide with chain mail.

Unlike other beauties on the master’s canvases, Athena exudes power, lust for power, her belligerence has a magnetic nature. The brilliance of her armor – the sparkling helmet, the breastplate of gold rings – corresponds to the radiance of her living, burning eyes, which began to symbolize the secessionist’s assertion of the right to free expression. The critics were so impressed with Athena that they gave her the name “demon of secession”. She gave a start to a new round in the works of the painter, who was called the golden period. In the image of Athena, Klimt captured her divine essence.