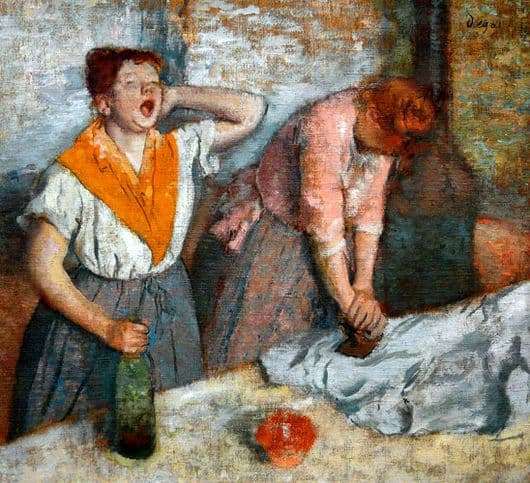 One of the founders of impressionism. With his canvases he manages to bring the viewer closer to the image depicted in the picture so much that, even without knowing the plot, we understand, and, most importantly, we begin to feel and empathize with the characters of his paintings. One of such works is the painting “Gladilschitsy” – it depicts two laundresses huddled in a closet. Working women, tired of their routine and repetitive work. This is a typical example of a worker of the early 20th century.

The work was done on canvas with a rough and rather careless primer, which, however, gives the painting a special effect: the oil paint resembles pastel technique, so beloved by the artist. He paints the strokes dry, careless, somewhat outlining the outlines of the figures dark, not denoting details, placing accents on the figures.

But the picture attracts not even the technique of execution. To pay attention to the postures – one woman stands with her head thrown back and yawns, it seems, arching her aching hands and arms with difficulty. A bottle of wine is squeezed in her hand. Another woman, hard at work, in her posture expresses hopelessness. She is not looking up from work and not paying attention to the yawning woman, with all her might she puts pressure on the iron.

Degas, familiar to us more as a “salon” artist with his exquisite canvases, depicting creative intelligentsia and high society, appears here as a realist. He shows us another, everyday, unaccustomed Paris, with simple working people, exhausted by hard work. Paris, hidden behind the luxury of squares, chic palaces, theaters and street restaurants. And this is not the only canvas depicting the life of people.

The artist was not indifferent to the life of ordinary people – she touched him, worried, and this can be seen in the images of the heroes of his canvases.