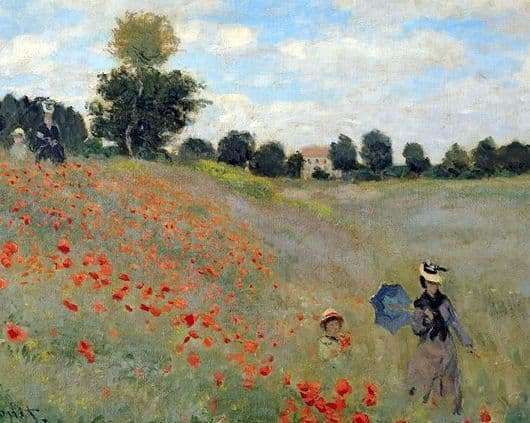 The painting “Poppies” (Poppy Field at Argenteuil), which was created by Monet in 1873, depicts a field with a rare chain of low trees separating the earth and sky. The landscape, which at first glance seems so simple and simple, has a very clear and thoughtful composition.

The picture is clearly divided into almost equal four parts, like a cross lined with a cross, where a bright, dark, distinct and coarse horizontal line crosses a barely noticeable, supposed vertical line. The point of intersection of the conditional cross is the house in the center of the picture, connecting the whole composition. The left lower part of the picture, dotted with red strokes of flowering poppies, is full of meaningful, emotional and artistic plans.

The original solution creates the illusion of the picture in the picture, reinforced by repeating each other two human figures on the hill and the slope of the poppy palette. A graceful woman in a hat and with a blue umbrella is the artist’s wife Camilla, and the boy next to her is Jean, their son. A repeated image gives the impression of their movement along a barely noticeable path leading from the top of the hill. A large tree, leaving the crown in the sky, enhances the effect of completeness and significance of this part of the picture. The right side, in contrast to the flowering poppies, is almost colorless, serves as a background for the woman depicted in the border area, filling in the right-hand fragment of the picture.

The sky is spelled out in several strokes, the missing whitish spots of the canvas untouched by paint indicate that the artist obviously did not consider it necessary to pay more attention to the upper part of the picture. In general, the canvas approves of earthly, mundane values, which in this context are of primary importance. To solve this semantic task, the artist uses all the means available in his arsenal.