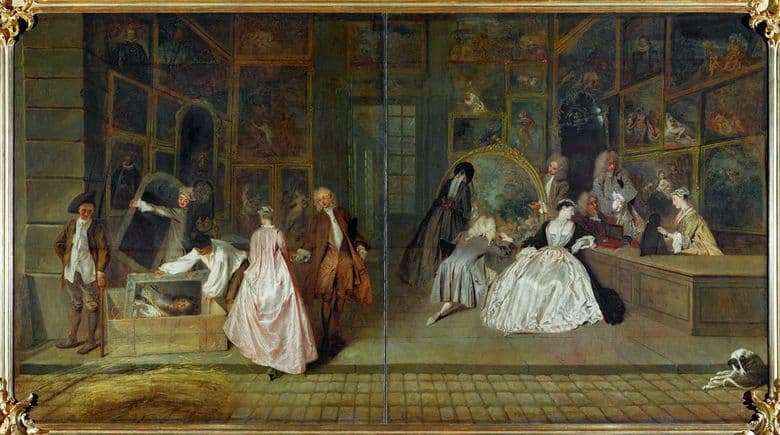 Jean Antoine Watteau is the son of a roofer, who has been addicted to drawing since childhood. In his youth, having no means of subsistence, he serially copied pictures of masters of painting. The reproductions that are being created today with the help of digital printing, the young Watteau redrawn – each individually. However, despite the endless diligence, the future artist had a very intractable character, and therefore often changed teachers and employers. He lasted the longest as a student of Claude Gillot, taking from his mentor a passion for depicting theatrical scenes and the lives of actors. The genre of his works was later called the “Gallant Festival” – after the name of one of the paintings. Watteau’s works were extremely popular with his contemporaries.

Cloth “Sign Gerssen shop” – the last thing the artist managed to draw before his death. Germain was a friend of Jean Antoine, and the seriously ill artist settled with him in the last year of his life. Zhersen recently bought an antique shop and offered to write a sign for his purchase. As such, the sign was not really needed; Jersen just tried to take his dying friend to some kind of work. But the picture was a success; Today, it is considered the best work of the artist, his “swan song”. Despite the large size, unusual for the creator, it was written in just a week, and Vatto worked only in the morning. This is the only work of the author, where the action takes place in the interior, and not against the background of the landscape.

The painting-sign is painted on two separate canvases inserted into a single frame – probably, there was simply no canvas of the desired size. The antique store, depicted by the artist, is covered with paintings from floor to ceiling. In the left corner of the servant is packaged in a box vintage portrait. On the right, potential buyers are exploring the product. It is believed that under the guise of a simple sign Watteau presented the history of painting in the form in which he represented it.