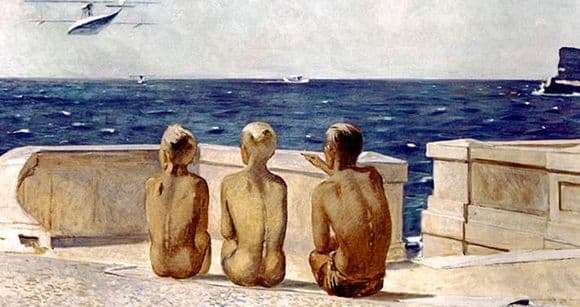 Deineka seriously fond of aviation. It is no coincidence that several of his works are devoted to this very topic.

In the 30s, the painter often traveled to the Crimea. After a trip to Sevastopol, his picture “Future Pilots” appeared.

The composition is really masterfully built. A hydroplane, which gradually decreases, unites the horizon, the sea and the three boys. One of the teenagers tells, and the rest listen to him carefully. Most likely, the boy comments on the maneuvers performed by the seaplane. We can guess the extraordinary attention in each figure. All their attention is fully absorbed by the phenomena that they observe. The flight captured them completely.

The sea is incredibly calm. The water is quite dark, in some places with a black tint. White scallops are running along the surface of the waves. On the right we see a rock. On the horizon – a white ship. His outlines are only guessed, so far away is he.

The artist uses a lot of colors for the sky. The clouds are arranged so as to emphasize the brightness of the sky as brightly as possible. The figures are also not uniform. There is something special about each one. We understand what interests them and what they want.

For Deineka no significant details. Everything in his picture is equally important. One seemingly trifle complements the other and creates a holistic picture. We can even feel the breath of fresh wind blowing the hair of children sitting on the beach.

The main content of this picture is a happy future that awaited all the people of that time. Every person believed in that.

We do not see the faces of the characters in the picture. They are depicted back to us. This was done specifically in order to create a collective image of the youth of modern Deineka pores. Hydroplane takes dreams to a distant future, which must be bright.