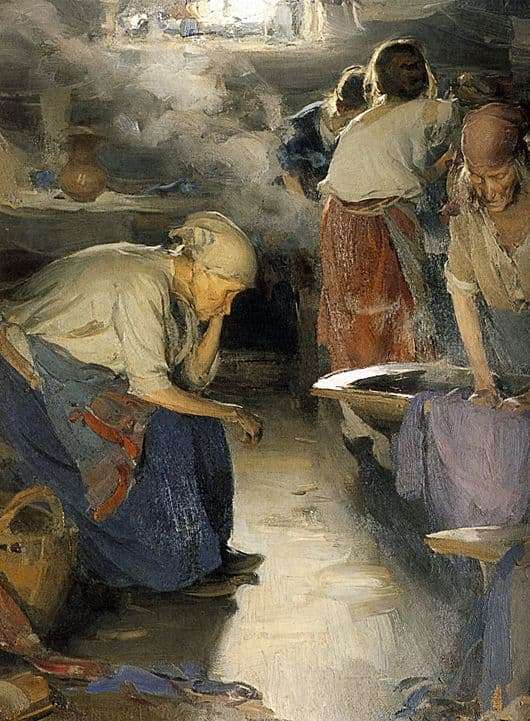 A. E. Arkhipov made his creative career in the field of genre painting, drawing various episodes from the life of the peasants. Cloth “Laundresses”, revealing the topic of hard, exhausting work, Arkhipov began in the late 1890s and finished in 1901. During this time, two versions of the painting were created. The work of “Laundress” is one of the most famous and at the same time one of the most important in the work of the artist.

The picture was conceived in Moscow and was inspired by visits to laundries located near the Smolensk market. However, another place was chosen for posing – a corner in Arkhipov’s workshop, where the lighting corresponded to the laundry basement.

The first version of the canvas covers a greater number of figures, the second is more concise. In the first variant, the group of laundresses forms a composition circle and looks like a single whole. The mastery of the artist conveys their exhaustion caused by excessive work, and the effect of movement is achieved through the use of reflexes of light playing on the wet surfaces of objects and the pale faces of women. In the second version of the picture, the topic of hard labor is revealed through the image of an old woman, a laundress, sitting near the trough with linen and hunched over for weariness.

The coloring of the picture is on shades of gray, purple and lilac. The broad strokes convey the glitter of a wet floor, the moisture permeating the air, curling around a pair of washers and pale lighting from a tiny window, the edge of which is visible in the picture.

In the canvas “Laundresses”, first of all, a social motive can be traced: extreme fatigue from hard work and awareness of the hopelessness of one’s position, which causes women to have spiritual anguish, feelings of hopelessness and apathy. In addition to social overtones, a new artistic manner is realized in the picture: generalization of form, almost complete rejection of detail in the image, work in broad strokes and the desire for free writing.