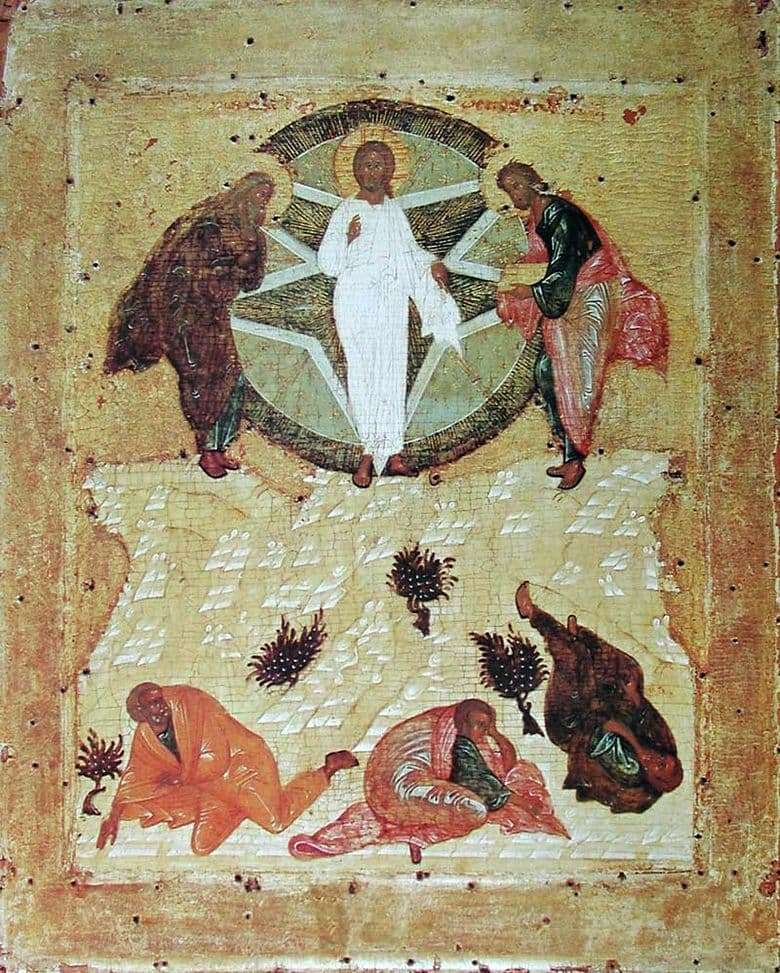 This image of the Lord was created on a lime tree board. Later, small keys were attached to the back of it. And it is interesting that the top one is driven from the left side and passes through almost the picture. When she was hammered into the board, they almost damaged the drawing, because the chips began to break away from the main part. So today a very large part of the board is split in two, but still it still holds in its place. How long the picture will remain holistic is unknown. In some places, such cracks are connected by conventional brackets, so that the steam from scattering the tree does not go further. In other parts of the image, such defects were stuck with a usual coarse canvas.

The back side is painted resistant paint. This was done for the purpose of long-term preservation of the tree in good condition. There is also a sticker with a half-rubbed signature, which means that this picture is an image of the Transfiguration… an icon…
As for the front side, then, to the great regret of art historians, it is in poor condition. In some places, the levkas disappeared completely, and the icon gaped with hollows of a bare board. In addition, there are a number of deep cracks.

It is also noticeable that much later, separate pieces of gesso were inserted. It looks darker, and it distorts the canvas. Particularly clearly visible inserts on the back of Moses. As for the image of Christ himself, we see here that without oval inserts there was no cost on the belt and the back.

While depicting Christ, the artist tried to observe church canons, therefore he did not draw Christ’s ascent among the mountains in detail. This was strictly forbidden when drawing images of church subjects. We see only the translucent silhouettes of these rocks, which creates some kind of an allusion, but no more. The main focus is on the figures of Christ, Moses and Elijah.