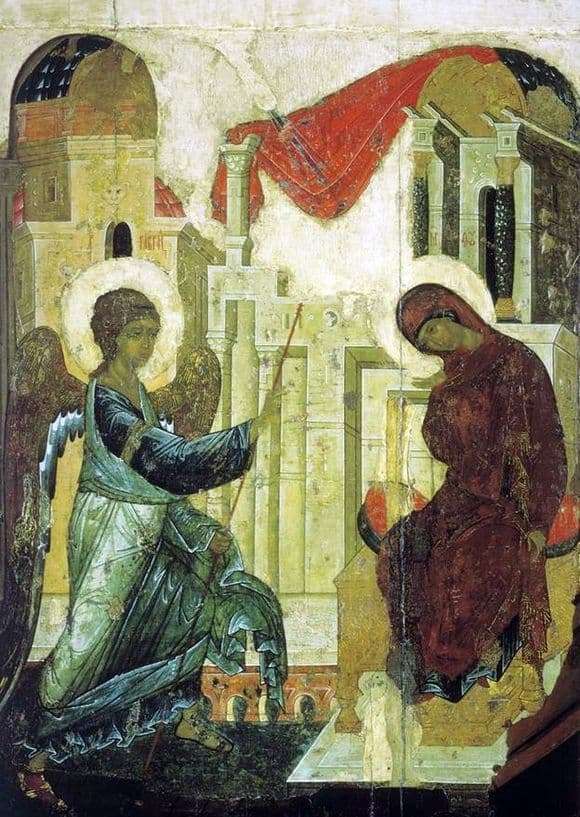 The icon, written on a lime board, has been preserved in the iconostasis of the Trinity Cathedral for many years thanks to the careful care of restorers, although the safety of the work of Rublev, of course, is difficult to assess as high. The plot is based on one of the central holidays of all Christians, depicting Gabriel’s offering of the Good News. The biblical scripture tells us that the Archangel Gabriel was to come to earth to report on the election of the Most Pure Virgin to the fulfillment of the Incarnation. On that day, the Virgin Mary learned that the fate of the whole human world was laid on her shoulders.

In honor of the Annunciation, Christians celebrate the holiday every year, the seventh of April. The icon depicting this event, created by Andrei Rublev, is of great value for all believers, and, of course, for the world of art. The creation of the “Annunciation” dates back to 1405. The unique features of the icon are presented by such innovations of the skilful icon painter as the richness of the color palette, the transition from canonical icon painting with its unnatural, unrealistic lines and forms to softer figures, the appearance of first emotions on the faces of saints (which was previously rare in icon painting).

In addition, the artist’s rare writing style is evident from such stylistic features as the negation of the crowding of images and the clutter of composition. Andrei Rublev was convinced that for a greater emotional response of believers, it is not at all necessary to pile up the plot with a large number of details, on the contrary, so that the biblical scripture does not change its essence, it is necessary to make the plot as transparent as possible. The iconostasis is a large structure, which, according to the artist, should be read from afar. Thus, every believer, entering an Orthodox church, must understand what the icons are about, what plots underlie them.