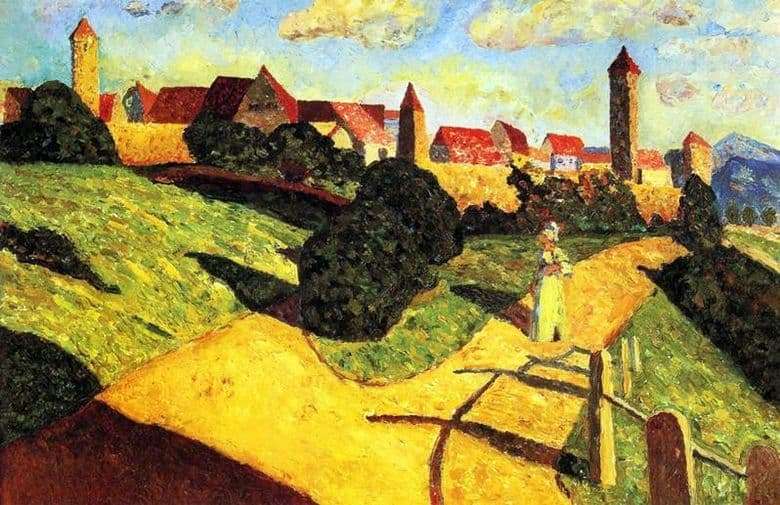 The painting “Old City” by Wassily Kandinsky was painted in the period of creative research, in 1902, and belongs to the artist’s early works. The work was created in the direction of Art Nouveau, characterized by the generalized forms. Like many other early works, the presented picture is written in a cheerful color palette, inherent in romanticism. Kandinsky for several years arrived in Munich, where he often arrived in high spirits. After traveling to medieval Rottenburg on Tauber, the master retained pleasant impressions and memories that brought him back to the world of fabulous dreams. Despite the fact that the artist experienced a long separation from the family and the death of his uncle’s home, he wrote bright work. Pleasant memories helped overcome the feeling of loneliness.

The artist had an incredible visual memory and amazing perception. Thanks to his abilities, he could reproduce from memory the landscapes he had seen. Kandinsky depicted the city in bright colors, creating an exaggerated stylized look. The picture is written with energetic strokes. Yellow and red color predominate, which fill the whole space with their flow. The sun metaphorically represents love, beauty, happiness and harmony. Such a metaphor is typical of symbolism.

The painting depicts a stationary female silhouette. The woman is dressed in a dress that is typical of the Middle Ages. Behind the heroine is the city. The woman seemed frozen in anticipation. The plot resembles another master’s work, called “Sunset”, where the rider heads for the old city. Compared with “Sunset”, “Old Town” looks more organic. Between these pictures can be traced some kind of relationship and secret symbolic overtones. It is possible that the heroine is waiting for her rider on the way to the old city.