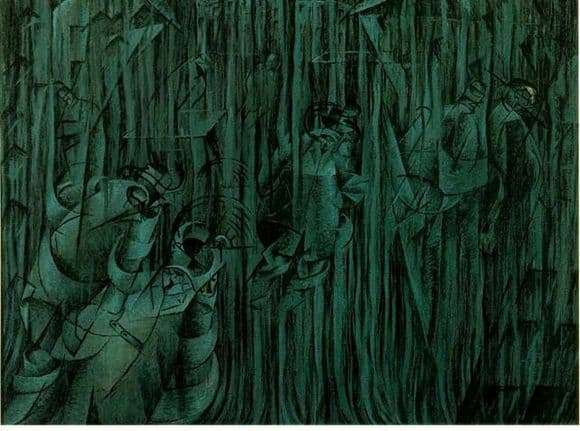 Umberto Boccioni is a representative of the Italian futuristic movement in the painting of the beginning of the 20th century. In addition, the painter is also known theoretical works in the field of modernism and realism. Being engaged in portrait painting, the artist often used elements of impressionism and post-impressionism. In 1910, following the Futuristic Painting Manifesto, Boccioni presents to the world a series of paintings, named after the main work, The State of the Soul.

Following the new trends in art, Boccioni refuses to use compositional plots. He sets himself the task of chanting the crowd, the fever of life, emphasizes the whirlwind of new relationships that have swept society. Boccioni predicts a mechanized future in which people will only be assigned to the position of outside observers.

The canvas, paints, colors and light are used by the artist to convey the idea of movement in all the variety of its forms and variations. The picture is a series of uneven lines and layered crystals. Arranged in a chaotic manner, they evoke images of animals, people, objects in the viewer. Everyone who saw the canvas with his own eyes has to decide on his own what exactly he wants to see behind the blue strokes, nondescript brush strokes. The inner world of the artist is revealed to the inexperienced lover of futurism in full.

Neglecting the form and standard vision of color, Boccioni successfully combines the ghostly and flashy. The artist denies such unshakable concepts as harmony and integrity, without depriving the viewer of knowledge about their existence, but also not allowing them to limit themselves to their adoption. The game of colors, the endless combination of shapes and sizes – all this does not allow to take your eyes off the picture for long minutes.