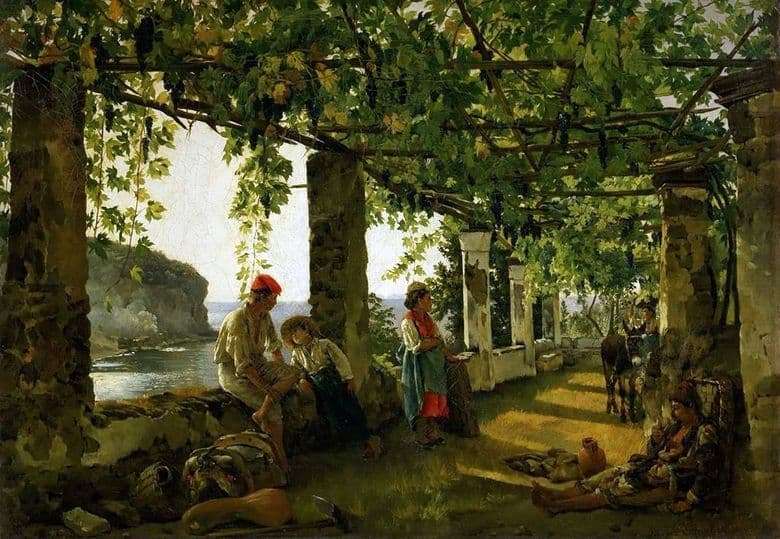 Sylvester Shchedrin was born in the family of a sculptor, rector of the Academy of Arts. The boy’s uncle was a famous landscape painter. Everything in the family contributed to the development of the artist’s talent – and the boy entered the Academy when he was only ten years old. At the age of twenty-seven, Sylvester received a guesthouse and went on sketches to Italy. He did not return to Russia anymore, remaining in the southern country he loved until the end of his years. In a short time, the young man became a real Italian, truly depicting in his works the nature of Italy and the life of Italian peasants.

A distinctive feature of Shchedrin’s landscapes is the presence of a person in almost all of his paintings – not as an extra, enlivening the landscape, but in absolutely natural conditions. Before Shchedrin, human figures were introduced by landscape painters to canvases mainly to demonstrate the scale of architecture – for this author, all the characters are busy with daily work. The rest of the artist followed the rules of the academic school, which he clearly learned during his studies. All his paintings are clearly divided into plans, lighting and perspective are ideally built. In the early works for Shchedrin, the “museum” brownish and ocher tones of the paintings are characteristic, later the green and bluish colors begin to predominate.

The painting “Veranda entwined with grapes” refers to the Naples period of the artist. At this moment Shchedrin had already settled down in Italy, communicated freely with the inhabitants, imbued with the beauty of the local nature. Unusual confidence appeared in the writing of sun-drenched streets, terraces and sea coasts; the artist eagerly experimented and as a result learned to perfectly convey the play of solar glare and features of the heated southern air. In warm golden hues the creator added cold subtones – blue with care in gray and silvery, lilac colors. These subtleties allowed the artist to perfectly depict the features of Italian nature, the colors of southern Italy. In this picture Shchedrin, as well as on all others, the magical Italy will have an ideal world for life, warm, friendly, filled with happiness and harmony.

As always with Shchedrin, the canvas “Veranda entwined with grapes” boasts a perfectly calculated perspective. Two gaps between the folded beams go away, revealing a magnificent view of the sea. The silvery shine of warm water attracts the eye; the picturesque rock protrudes from the water surface to the left and stretches upwards. Lace leaves picturesquely cross the holes between the beams, framed the veranda.

Simple Italian workers in the picture hid in the shadow of the midday sun. After lunch in Italy comes a few hours of well-deserved rest, when no one works – this has always been the case, and this is exactly the moment depicted in the picture. A barefoot man in snow-white clothes and a dappled bright red hat, most likely a fisherman, sitting carelessly on the parapet, talking about something with a boy in wide pants. On the boy’s head is a wide-brimmed straw hat that perfectly protects his face from the sun. A little further stands a woman in bright cotton clothes. Another man slumbers right on the floor, leaning his back against a wall; next to him is a pitcher and leftover dinner. All figures are depicted in naturalistic poses, the picture breathes peace of mind and relaxation.