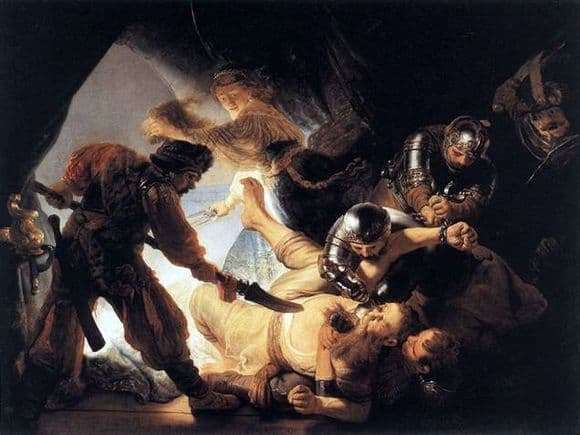 The Dutch painter Rembrandt depicted on canvas in 1636 one of the most popular biblical scenes. “Blinding Samson” wrote other contemporaries of the artist. The work of Rembrandt is unique in its own way and deserves consideration.

The plot from the Old Testament tells the story of Samson, who possessed tremendous power. Thanks to his power, he was able to protect the Jewish people who are in a slave position from the Philistines. The powerful Samson molested the Philistines, so they conceived to deprive him of his power. When they learned that Samson was in a love relationship with the Philistine Delilah, they incited the woman to find out about the source of Samson’s power.

For several attempts, he surrendered to an insidious woman, telling him that his long hair gives him legendary power. Then at the time of sleep, the soldiers attacked the man, weakened him with cutting off his hair, and then blinded

him. This dramatic moment portrayed Rembrandt in “The Blinding of Samson.”

The figure of the biblical hero is highlighted in the picture color. Samson is dressed in light clothes. Around him thickening darkness. Five armed soldiers knocked the hero down. They in every way keep the unarmed man. One Philistine dagger blinds Samson. Here in the composition there is a traitor – Delilah. She holds cut hair in her hand. Hurrying to escape from the scene of the crime, she turns around with curiosity, looking at the torment of Samson.

Rembrandt masterfully conveyed the passions in the biblical storyline. Samson, gritting his teeth, restrains terrible suffering. The soldiers who surrounded him, with determination and calmness, carry out the order. It affects the complete indifference of the characters to the pain of the defeated Samson.

The picture with the biblical scene about Samson is placed in the Shtedelew Institute in Frankfurt.