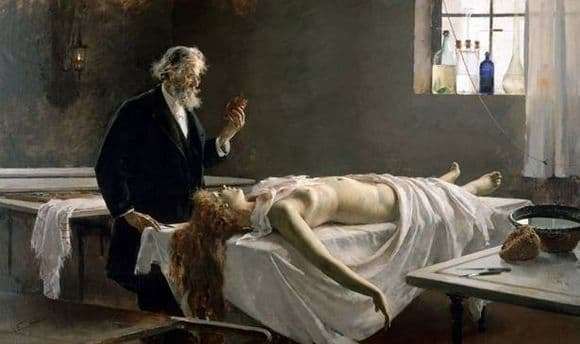 Enrique Simonet Lombardo is a famous artist from Spain. His works have an individual style and are recognizable. The most famous work of the master “She had a heart.” This picture brought the artist world fame and a series of various awards and prizes. The canvas has two more names: “Anatomy of the heart” and “Dissection”.

The painting was written in 1890. For a modern person, the plot of the work is unusual and evokes a feeling of fear, but for that time such a picture was simply revolutionary. It still stirs the sense of reality and changes the concept of existence on earth itself.

The painting depicts a room where an autopsy is performed on a woman. The plot is saturated with cynicism. It’s amazing how a creative person could display the heart extraction process. The image is absolutely realistic. The room is gloomy with gray walls. In the foreground is the edge of a rusted wheelchair, there are tables everywhere, on one of which lies a dead woman.

Practically near the ceiling, a small window lets in a bit of daylight, but it maintains the lighting of an old lantern hanging alone on the opposite wall.

A man of mature age dressed very formally. Apparently this is exactly how the doctor looked at that time. It is unlikely that the profession of the pathologist existed at the end of the nineteenth century. Most likely, this person treated people and did an autopsy as well.

In that era, organs were removed for further study. This fact further enhances the primitiveness of the intention to extract the heart and makes this process even more formal. A man looks at the extracted internal organ with interest.

The artist is very realistic conveyed the process of opening a person. The picture demonstrates the value of the human body for science, it is impossible to grasp the value of spirituality. The doctor is absolutely indifferent to death and treats a dead woman only as a source of laboratory samples.