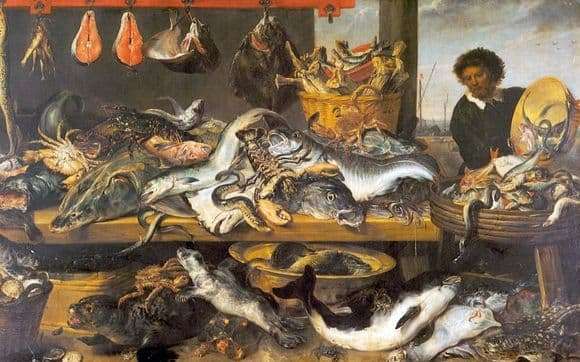 The work of Frans Snyders in the State Hermitage Museum “Fish Shop” cannot fail to impress with its rich composition. The picture combines elements that can not be compatible in reality. The only thing they have in common is their habitat. And this is the underwater world.

The work of Snyders displays various aquatic inhabitants that are laid out on the shop window as a commodity. At the same time only a small part of them has a marketable appearance. She is, first, and striking. Especially this contributes to the bright red colors, which gave them the artist. These are two juicy pieces of red fish. The top mount, on which the fish hangs, was also particularly bright.

Then the eye goes to the massive carcasses of gray fish of various species. Some of them are already dead, but most are still showing signs of life. This is a huge pike, having an appetizing look. And crayfish, crabs and lobsters trying to leave the shop. However, this swarming mountain has some unattractive elements. For example, a large black fish in the left side. Her open mouth can scare the buyer more than attract. The same goes for octopuses, from whose tentacles slime flows down. Below the shop there are representatives of the animal world inappropriate for the fish trade.

Miniature killer whale, its size is similar to a dolphin. Unlike other inhabitants of the shop, she seemed to laugh. The big black seal is not left without attention, which is not at all a usual commodity for port shops. He grins aggressively at the cat, which hisses at him in response. The trader himself catches the least of all. However, this has its own reasons. The fact, that Snyders did not like to draw people on his canvases. Therefore, other artists did it for him. Because of this, the seller seems inconspicuous among the bright components of the “Fish Shop”. Moreover, he seems to be superfluous here.