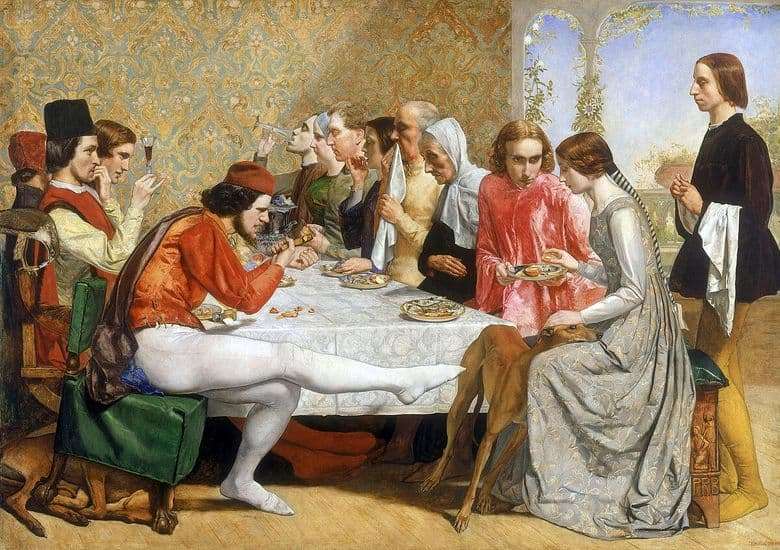 The story of John Keats tells us about the relationship between poor Lorenzo and Isabella. Keats inspired Boccaccio’s Decameron. According to the story, the girl was in love with a guy, but her brothers were against the union, because the young man was rather poor. They killed poor Lorenzo. Isabella, stole the head adored, decided to hide it from prying eyes in the pot, where it grew Vasily. Soon relatives learned about this secret and stole a vessel with a head. The girl became even more unhappy because she lost her lover again.

On the canvas “Isabella” the artist depicted a family sitting at the table. We see the face of one of the brothers, who angrily kicks Isabella’s dog with its foot. Millet believed that the dog personifies fidelity, thus, having written that the brother kicks the dog, the artist tries to tell us that the brother does not consider the feelings of the sister, they do not respect them.

According to some researchers, the artist saw some sexual overtones in the brother’s straight leg. They decode it so that the brother was in love with his relative, and while kicking the dog, he wants to conceal a sudden erection. The viewer does not understand and the shadow is completely different from the shadow of the hand. What is it really? Millet conveyed so motives with subtext and images, so sensual that his works could be interpreted in two ways.

From interesting facts: the author depicted real people on the canvas. For example, the artist’s father is a gray-haired man who wipes his lips with a handkerchief. The writer Rossetti in the picture is depicted in the role of Lorenzo. In the role of Isabella was the half-brother of the author. In the role of brothers and heroes, which are depicted in the background, were close friends of the artist. If you look at the canvas, we can notice the three letters PRB, which at that time designated the Pre-Raphaelite society.