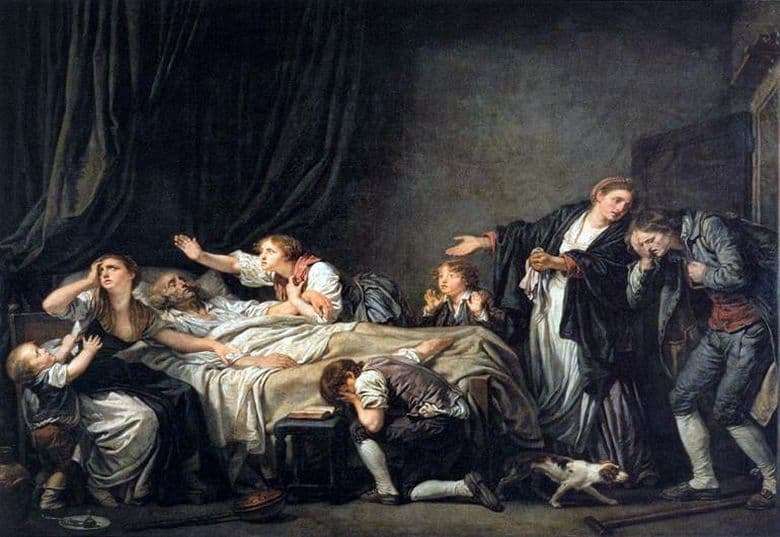 The picture “Son of Punishment” – the embodiment of the artistic skill of its author, but also her edification. Jean-Baptiste Dreams depicted a complex family conflict. We are witnessing the sorrowful experiences of a family that has just lost its head. The viewer is involved in the heap of emotions that the deceased’s relatives feel. The unbearable sadness and confusion of adults is combined with the curiosity and fear of children. A portrait of each character traced to the smallest detail, exposing the entire palette of feelings. Some theatricality is inherent in the participants of the painting. But this hyperbolization is necessary to enhance the drama and expression of the instructive meaning of the picture.

The experiences of women and younger family members are deep and unbearable. But they can not be compared with the grief that falls on the shoulders of an inconsolable young man. He just entered the room. From the backpack behind you can find out in this man the prodigal son who once left his father’s house and returned to receive parental forgiveness.

The picture makes a reference to the famous biblical story, but offers a different ending. The father did not wait for the obedience of his son, he returned too late. The young man is now unable to bear the grief that has fallen on him, mixed with a sense of guilt. This is indicated by the hunched posture and gestures of the hero.

The moral of the picture is expressed through the image of the mother. She looks at her son with reproach and pity and points to her father’s bed. It is necessary to appreciate and take care of their loved ones, because any day can be the last. It is necessary to respect the parents and ask for forgiveness in time if guilty. The prodigal realized it was too late. Life taught him a cruel but fair lesson. By his disobedience the youth punished himself with torments of conscience. But to fix something is no longer in his power.