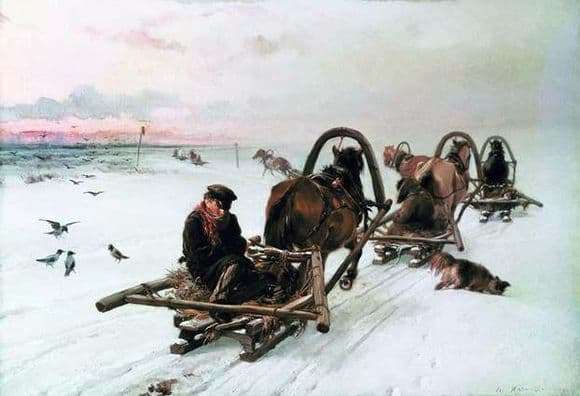 The picture “Emptys” is an unspoken symbol of perseverance and strength of character. She became a real revelation for the poor and peasants living in the village. Pryanishnikov depicted on it a man who managed to escape from the village and break through the road to knowledge. Although at first glance, the plot is not so obvious.

Indeed, the first impression of a glance at the canvas is depressing. The color palette is full of shades of brown and gray. It was a frosty day, and it was moving towards evening. Gusts of strong icy wind rush over the field. Only in the distance a light pink strip of sunset gleams. Single birds and empty carts reinforce the effect. The young man sitting in the foreground is not dressed for the weather. His coat is too thin to stand so cold. His scarf is too old to protect his neck from the wind. His posture is tense, he is obviously completely frozen.

However, a close look will discern several textbooks among the few things a young man has. This reveals the urban student who managed to break into the city and begin education. Most likely, he joined the wagons of peasants, leading their way from the fair, to visit the family. He is ready to endure much in order to achieve his goal.

This is exactly what the villagers wanted to see. Many of them, their children and grandchildren, traveled a similar path. “Emptys” is a clear proof that nothing can prevent a Russian person from breaking or breaking the power of his spirit. The masterpiece is often correlated with the famous Nekrasov poem, which tells of the complex path of Mikhail Lomonosov to Moscow. His story is a reference example of the success of a simple young man, who managed to become one of the best scientists in the country.