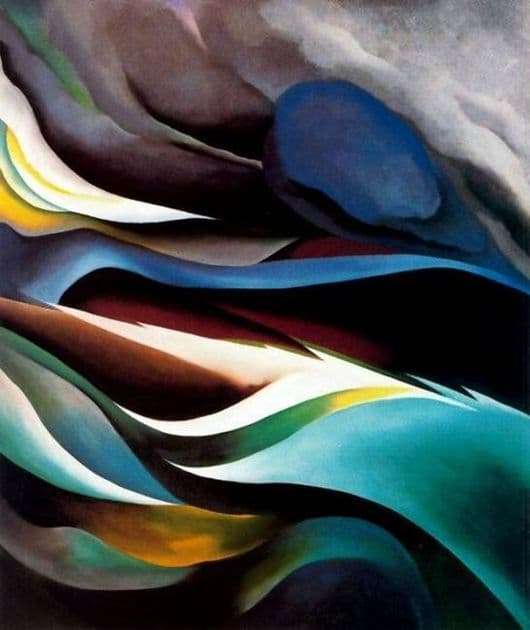 Two and a half thousand works. That is exactly how much American artist Georgia Oh Kiff created in 70 years out of 99 lived in the world. And although her favorite subjects were plants and, oddly enough, the skulls and bones of animals, among the hundreds of works are such as the picture “From the Lake”.

Try to describe the sea. And the earth? The moon? Either nothing good will come out, or there will not be enough paper to tell about those sensations and thoughts that arise when looking at such objects. Something like this happens when confronted with creativity Oh Kiff. Because the image of something, for example, a flower that appears on its canvases, if you look closely, is very reminiscent of the female bosom, “disguised” by delicate petals. The plot of “From the Lake” is not defined, because it simply does not exist.

Mixing lines, faces, forms – like the waves that have risen to the surface of a lake that is quiet to this day, playing with rich colors and tones. Do not expect to see anything coming up, or someone leaving the reservoir, as stated in the title. It is unlikely that someone will appear from there. Just admire the fantasy of the author of the work, in which, who knows, perhaps, make out something completely different, not noticed before. It’s like a mystery, and the more you look into this canvas, the more you plunge into a whirlpool of intangible emotions.

After all, as you know, there is nothing worse for a creator than to tell others, about which, in fact, his work. Everyone is obliged to “walk” and “speculate” alone, and when the “enlightenment” comes, to receive an incomparable pleasure from the mental work done. Therefore, if you do not immediately understand