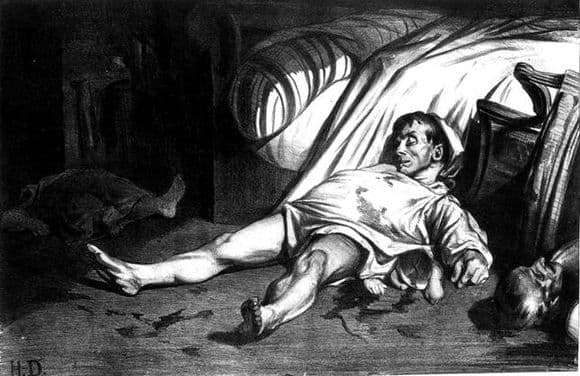 Honore Daumier is a cartoonist. “Transnonen Street” was written by him as part of his work in one of the best magazines in Paris, Caricature. Cloth created April 15, 1834. To create the picture, a simple sheet of paper and a simple pencil were used, with which the artist was able to convey the essence of the tragic events witnessed by many Parisians living on Transnonen street.

The central place in the picture is given to a disgusting kind of person, more precisely, the troupe of this person. The body is prostrated at the foot of the large bed, from which it was pulled off in the most unceremonious manner. The man is dressed in a nightdress and a cap. His eyes are closed, his arms and legs are scattered on the floor. Dark spots are visible on the white fabric of a nightgown tucked up above the hips. Most likely it is blood. The body of the dead man is well lit, the corners of the room are hidden in the darkness, but even he cannot hide the fact that there are other actors.

After close inspection, it is possible to notice that the dead person does not lie on the floor at all, but on the body of the child, who is still very young. The child is turned on his stomach, his face is not visible, from under the troupe of a man only a small head and hands can be seen. The child is stabbed and this makes the crime picture even worse.

In the lower right corner of the picture one can see the head of a dead old man. The bed has been dismantled, the floor has the same stains as on the shirt of a man by the bed. On the wall on the left side of the picture is a plump woman. She is also immobile, like the rest of the characters in the canvas, death overtook her unexpectedly, and from that the picture becomes even darker, but at the same time natural. The canvas is devoid of theatricality inherent in this era, everything is simple, tragic and sad to the limit. The picture does not look like a work of art; it’s rather an identikit made by an experienced expert at the crime scene.