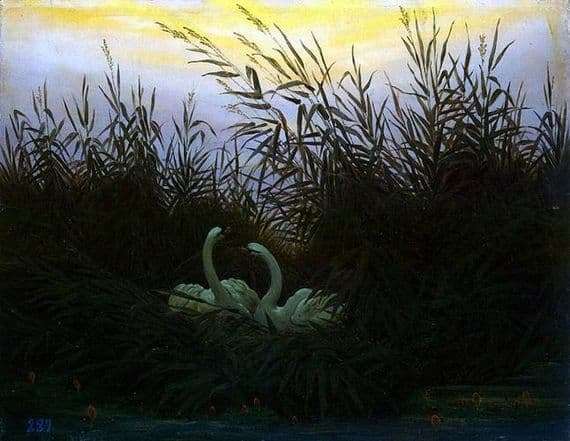 Frederick is a famous German artist, romanticist. Like other followers of this trend, he believed that the whole world is enclosed in man, that there is nothing more valuable than man and his personality, and that emotions are valuable.

His pictures, like the pictures of other adherents of romanticism, are always full of very bright, very clear colors and sometimes reflect reality a little exaggerated. Exaggeratedly light or bright, for example. Each picture has its central image, around which it is concentrated or the central line on which it rests – the ship, the lighthouse, the horizon line, the reflection of the sun in the sea.

“Swans in the reeds” is no exception. When you first look at her attention inevitably attract swans – one reaches for the other, which, on the contrary, throws her neck back, looking a little derisively, a little down. They sit in the reeds, sitting, obviously, for the night, their necks are proudly arched, their eyes are alert and black.

Lush white feathers on the wings cast yellow shadows, the birds themselves as living, ready, it seems, at any moment will begin to stir, rustle, settling comfortably. Under the swans and dark, almost black, reeds – a pond.

Dark deep water, in which hardly anyone would think to bathe, small red flowers reach for the sun on the very shore. And above them is the sky, to which much attention is paid. It is bright, bright, full of azure and yellow reflections, it looks like water and is ready, it seems, to splash. Against the background of black reeds, it seems radiant, unbearably contrasted, and the picture seems to be divided into two halves.

One half is the sky. The other is a pond and swans. There is an opposition of the earthly and the ordinary, the beautiful and the familiar, the heavenly – the radiant, the delightful, the unearthly and the wondrous.

And, as if agreeing with himself, combining the two halves into one picture, the artist concludes that they are one and impossible without each other.