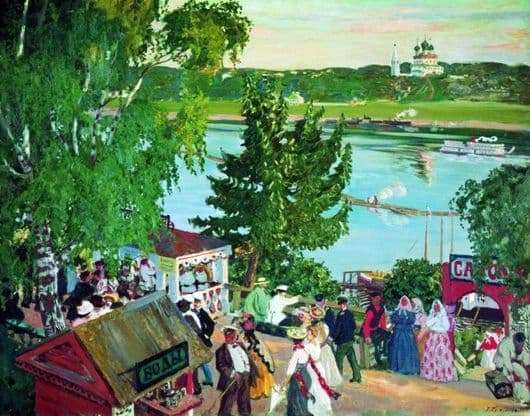 The idea of ​​the picture arose from Kustodiev during his stay at the Hermitage Hotel, whose windows overlook the Volga Embankment. It was she who served as a prototype of the holiday of life, which was captured by the artist – cozy kiosks with sweets, street tea, marinas with steamships, the Resurrection Cathedral on the other side of the Volga, and all this space is filled with bourgeoisers, merchants, in general, purely “Humefies characters.

And if you listen, you can hear, it seems, a romance coming from somewhere that evokes Ostrovsky’s Dormitory. Larisa, Paratov, and the others are about to appear… In general, the picture of the provincial life, captured from the height of the second floor, produces a truly pacifying, oddly harmonious impression.

Kustodiev is not for nothing called the “dreamer of life.” Like Gogol, he, through detail, seeks to portray the character of the Russian nation, to convey longing for the past Russia with its leisurely patriarchal structure on the eve of the events of the twentieth century. Having once gone on vacation to Kostroma province, he first saw a fair that impressed him with its brightness and variety of interesting faces to the depths of the soul. Hence the implicit desire of the artist to capture the festive side of the life of the people – perhaps, not without the influence of the creator of “Evenings on a farm near Dikanka”.

Nevertheless, Kustodiev is a modernist artist by nature, which is manifested in a detached, already slightly ironic depiction of everyday life, which is no, no, and manifests itself. On a purely artistic level, the modern style is expressed by a certain conventionality, one might even say, by the unreality of the portrayed. When you see the pictures of Kustodiyev, you can’t immediately guess whether you see an image of a busy street in front of you, or just bright scenery, or a pattern on a tapestry.