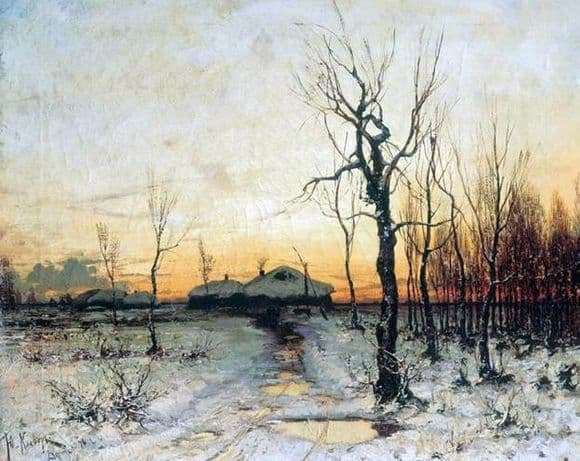 Klever Julius is a famous Russian landscape painter of German origin. Despite the fact that the artist did not graduate from the academy, he gained popularity, fame and financial independence. Most of the work of the painter is devoted to Russian nature. The picture “Winter” reflects the whole essence of the changing weather in Russia.

The artist often displayed village life. He loved the Russian land, after many years of emigration, in difficult times for the country, Klever returned to Russia. The painting depicts a village in winter. Several houses in the snow are seen in the background. Smoke flows from the pipes, people are at home. The bright glow of sunset illuminates the sky. In the foreground is a large tree, it is without leaves and stands alone on its side. Looking at him, it becomes chilly and lonely. Perhaps the artist, thus, showed his loneliness, which so often accompanies winter evenings.

This evening is depicted in the picture. In winter, the village is quiet, there are no people on the street. Frozen puddles talk about the thaw, which happens during the day. The sun is warming, but this does not make it any warmer, everything also needs to be heated in the furnace and heated by the fire. The roads are impassable, and the day is shorter. Nature sleeps, and man is its integral part. More and more time people spend at the hearth. The artist is very realistic conveyed the mood of winter. Despite the white snow, the picture is full of colors. It is impossible to take your eyes off the glow above the horizon. So I want to walk along this road and go into a warm house.

The picture is made with small strokes, which makes the image realistic, the lines are clear. Even the background images are clear. From the work blows home. It is winter and cold outside, but the contrast between lonely freezing trees and a warm house is obvious. Clover has shown the way home, return home where you are remembered by the present and waiting. Impassable roads will not be able to impede the path to the house, where the fire is burning and cozy.