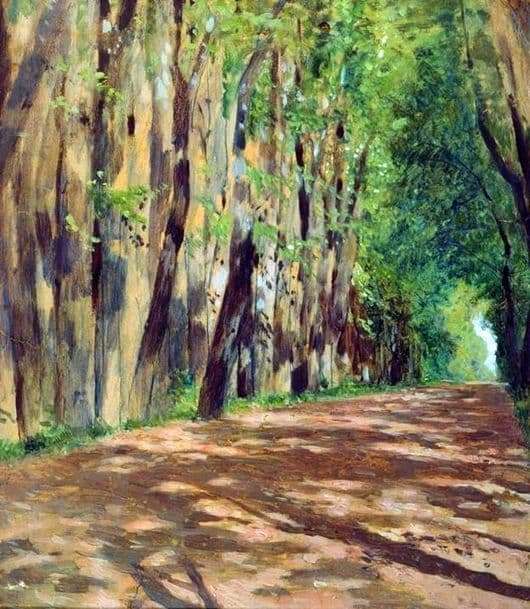 This picture among the paintings of Isaac Levitan – not the most famous. However, in her, this true singer of Russian nature showed the beauty of the summer day. The trees in the picture intertwined crowns, and the lacy shade of their foliage falls on the yellow dirt path. The same yellowness is visible on the trunks, only far away, at the end of this tunnel created by nature, one can clearly see a blue sky.

From one edge of the path, it seems that the trunks are standing right next to each other. Apparently having noticed such an effect, the artist hastened to transfer it to the canvas. If you look closely, it becomes clear that the trees simply grow in several rows.

This is probably a park that was once planted by people. While the trees were thin, it did not seem that they were planted very thickly, but over the years the trunks gained their power, and now they stand like a system of Roman legionnaires.

The alley goes into the distance, and from the very beginning you will not even see that there is at least one person in the picture. However, there is someone in the background. Visible is the figure of a man who goes like a spectator. But to consider it in detail is quite difficult.

The man does not walk on the road itself, he goes on the grass under the trees. Whether he is hiding from the heat in the shadows, or walking on the grass itself gives him more pleasure. Or maybe he just stopped to rest and does not want to impede the movement of others. But going towards is not visible. Yes, and his figure merges with the trunks.

This makes the picture mysterious, and when you are distracted by a person, you forget the thin acacia, which stands out from the general plan of the age-old trees with its darker foliage. There used to be many such parks, there are in Moscow and the Moscow region even now. But not everyone is able to see the beauty of the most ordinary alley, illuminated by the sun. Only a great artist knows how to convey this beauty in order to pay attention to it.