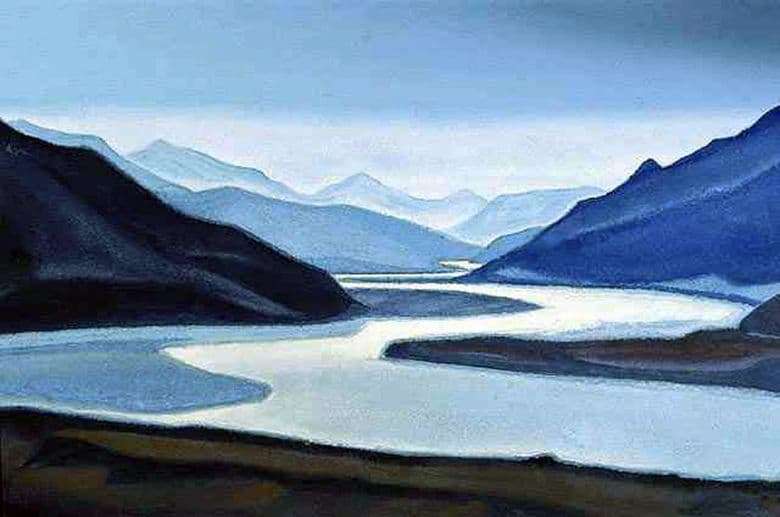 From early childhood, Roerich was fond of painting, history, and archeology. He was attracted by Eastern culture. He graduated from the Academy of Arts in St. Petersburg. The artist was engaged in painting and sketching mosaics for temples in Russia. Acquaintance with Elena Ivanovna Shaposhnikova and gave birth to his love for the East. She introduced him to the great works of the Indian philosophers, with the Upanishads. At the beginning of the 20th century, Nicholas Roerich went on a journey and made acquaintance with the philosophy of India.

The most picturesque painting of Roerich – “Brahmaputra”, which he wrote in 1946, impresses the audience. Brahmaputra is the name of a river flowing in India. It takes its beginning from the great Nagy Lake – Manasarovar. Translated from Sanskrit means “son of Brahma” (Brahma is a deity in Hinduism). Roerich decided to portray this amazing place with which a large number of legends are associated. Here, on the road to Everest, there lived a lonely old man – the clairvoyant Milarepa, who, before the Sun ascended, listened to the voices of the Devas. Closer to the Shigatz on the bank of the Brahmaputra the Ashrams of the Himalayas Mahatmas not so long ago lived.

Paintings decided to portray the Brahmaputra in the evening, which at this time of day exactly resembles its name. We see the magnificent calm, the significance of an ancient deity. The river flows calmly, widely, among the rocks and sands, flows around the mountain rapids until it reaches its destination – the world ocean.

After death, the artist left a great artistic legacy. His numerous works – drawings, paintings, sketches of various decorations, are still kept not only in museums, but also in private collections around the world.