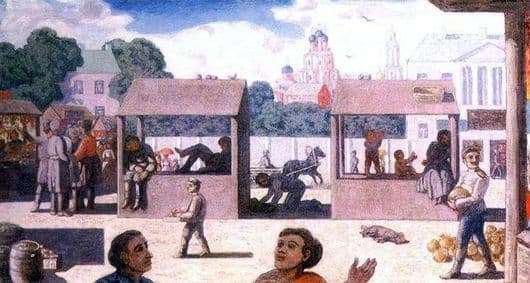 The picture of the rather large and famous Russian artist Nikolai Krymov called “The Area” can be quite calmly and quite boldly designated under the general title of his very first early works. But even then, at the time of writing “Square”, Krymov was already quite famous.

This canvas, painted in a rather moderately impressionistic style, can be called a kind of transitional moment, from those rural landscapes that Krymov loved so much, to direct effective movements and their vision by the artist himself.

Pure, not mixing paints, along with a separate stroke, the only thing that differs from the paintings of that era is some fading colors, but at that time it was just beginning to become fashionable and the artists believed that it gave their creation some kind of poetry, refinement and tenderness. .

In this picture we see an individual color scheme, mannered images of people, each figure of which, narrates about something based on the place of position and pose in which one or another character is located. We are witnessing the introduction into our familiar genre of “truly” written landscapes, some notes from a theatrical production that the artist offers us, quite skillfully combining these two genres together.

In this work, some kind of granularity is clearly visible, something like descriptiveness. Looking at this picture, it immediately becomes clear scene, which, as if playing all the characters traced in the picture. Such, at first glance, unique fusion of two techniques seems rather surprising, but in principle, if you look at the pictures of Krymov’s contemporaries, you will also notice their attempts to produce something similar, at that moment many tried to imitate this new trend, some even very well.