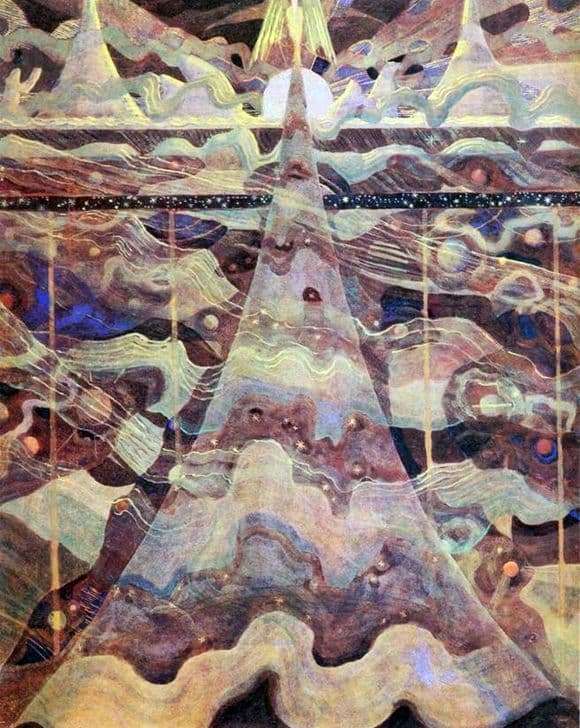 The sky landscape depicted by юрurlionis is a vivid example of symbolism in painting.

Mikalojus Čiurlionis is an absolutely unique artist in many respects, his creative life is very short – only seven years, for which he created more than 300 paintings, some of them recognized as masterpieces of world art. The artistic style of Čiurlionis is modern and art nouveau in the mixture of symbolism, folk motifs, the metaphor of Japanese and Indian cultures.

In all the work of Mikalojus Čiurlionis, one can note a commitment to the “mixing” of types of art, such as painting and music. The name of the film “Sonata of the Stars” confirms this thesis.

Čiurlionis’s canvases tell us about several worlds connected together, captured only in one beautiful moment of eternity. The creation of stars, nebulae, the creation of the earth with its endless expanses and, finally, the creation of such a great, but such a fragile person – all this you will find on the canvases of Čiurlionis. Such a “three-world space” of the artist’s paintings is present in a number of his works.

We can see vivid images of other worlds in the Sonata of the Stars, the space music of three plots, combined in its canvases sounds loudly and sublimely. The Sonata of the Stars is recognized as the best picture of Čiurlionis from the point of view of his own philosophy.

Allegro – the first part of the artistic diptych tells about the infinite speed of space movement, about how at the peak of the cone-shaped height of the Universe a figure of the creator appears, pure as White Light, omnipotent, like Cosmos itself. Its wings exude bright, but not blinding light.

In the second part, the andante, the viewer meets the already created planet with soils and dust, rotating on the subtle waves of the Universe way. Both paintings are permeated with a connecting thread, which creates the thinnest connection, and to this day plays a magnificent symphony of a beautiful symbolist artist – Mikalojus Čiurlionis.