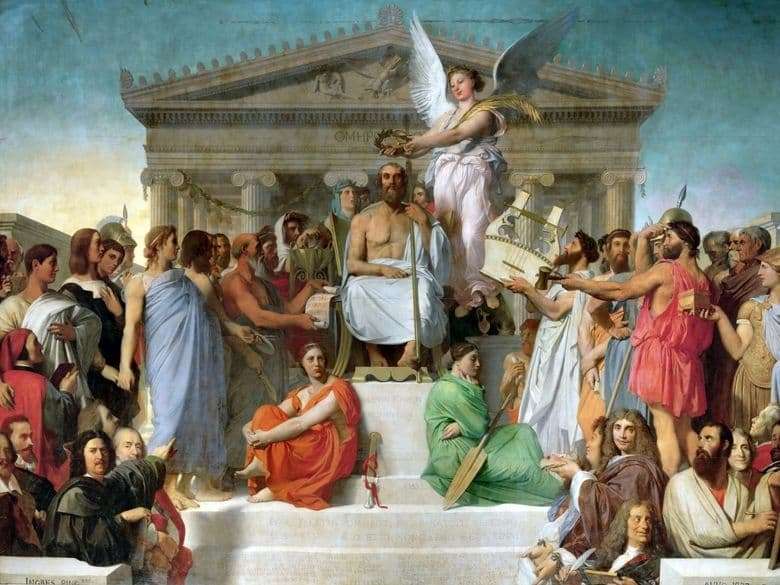 The main character of this canvas is Homer – the great old man, whose thoughts and sayings have been passed on from mouth to mouth for many centuries. The old man’s face expresses wisdom and mental clarity, and the sage’s shoulders and knees are covered with white cloth. Glory – a beautiful angel in white attire and sparkling wings crowns an old man with golden laurels. The face of Glory expresses joy and sympathy for the sage.

Below the sage’s throne, two figures are depicted, playing the role of an allegory of the Iliad and Odyssey. On the sides of the two women are forty-two more figures, among which there is only one woman – Sappho. The people around the throne are great artists, writers and politicians from ancient times to the seventeenth century. The artist is extremely selective towards the great figures, which made the canvas.

Ingres wanted to make the picture as dynamic as possible, so one can discern Apelles – the ancient Greek painter leading by the hand of Raphael in the direction of the throne; Pindar to the right of Homer stretches the luxurious lyre to the sage.

A man with a chisel and a hammer is Phidias, depicted with the main attributes of his profession. At the bottom of the canvas you can find Nicolas Poussin, drawn by Ingrom from the famous self-portrait of the artist.

The soft color palette of the image is paired with an abundance of bright colors that are present in the robes of the characters. The expressiveness of the figures, careful drawing of faces, textures, elements of the background building, a careful approach to the selection of great faces – all this demonstrates the serious approach of the author to writing the work. The master himself said that this particular painting should become the main and fundamental work of his life. It is impossible not to notice the amazing development of the sky, its soft but bright color. Overflowing the background from dark blue to almost white color in the direction of the actors gives the mystical atmosphere of the whole composition, creating the feeling that the sky envelops every person present on the canvas.