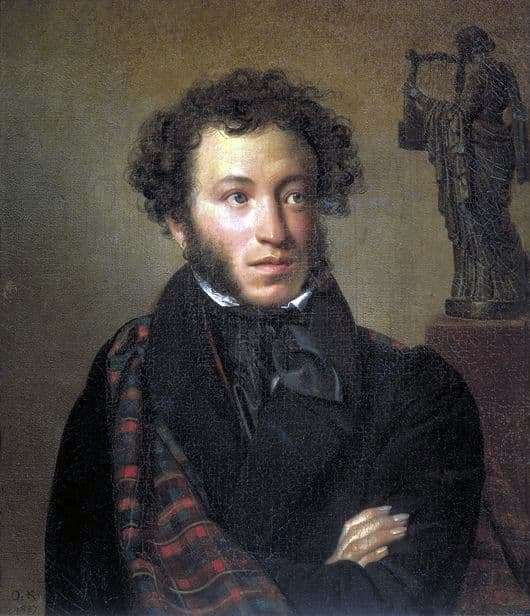 Alexander Sergeevich Pushkin is deservedly called the Sun of Russian Poetry. And that is exactly how we see it on the portrait of the work of Orestes Kiprensky. This artist had the fame of one of the best portrait painters, and that is why Anton Delvig ordered him to portray his friend, the great poet A. S. Pushkin. Contemporaries found that the rubbed is quite realistic.

The poet is depicted in a frock coat and a raincoat draped over one shoulder. That was the way young people dressed in fashion were dressed. But the lighting in the picture is chosen in such a way that Pushkin’s head, not clothes, stands out most clearly. His face seems to glow, it is marked by a seal of inspiration. It seems that the poet is considering a new poem. At the same time, in the person of the poet there is anxiety, it is noticeable through tightly compressed lips. The look of the poet is rather sad, you cannot read serenity in him. But in the

whole pose there is humility and calmness. This can be seen in the elegant arms crossed on the chest.

It is impossible not to notice the figure of the muse in the corner of the portrait. At the bronze statuette in the hands of the lira. This is the muse that Pushkin mentioned more than once in verses. Kiprensky wanted to show that the poet and his inspiration are never separated. Since the portrait was written during the life of a genius, there was also information about how the poet himself valued it. Pushkin found that the artist embellished his appearance. However, the talent of a true portrait painter is not to convey all facial features with photographic accuracy, but to portray the spiritual world of man.

Therefore, after many centuries and years, we see how spiritual Pushkin is, how much his face shines with inspiration. Kiprensky brought to descendants exactly what we need to know about the great Russian poet. After all, to judge how Pushkin looked, we can only by his portraits. The rest is in the verses and prose of genius.