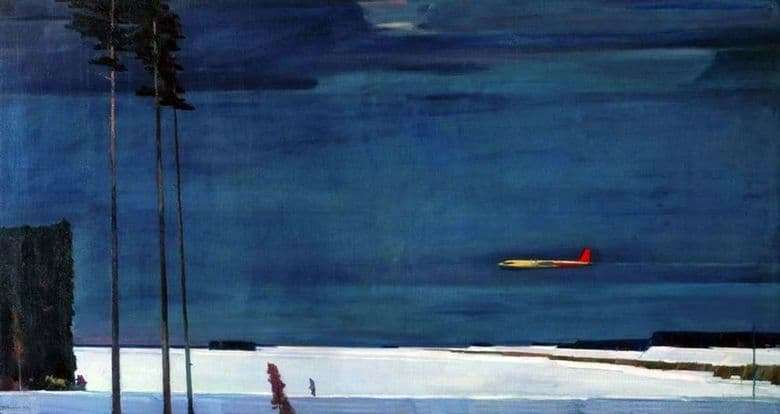 Landscapes of the artist convey a certain generality, breadth and spaciousness. A few blurry details form a thin muslin, through which one has to peer, gradually revealing all new facets of the image. Some posterity is compensated by a rich palette of colors subtly changing under the master’s brush.

Impassive frozen nature contrasts with the rapid movement of the aircraft. A dark, heavy sky hangs over the winter smooth surface of snow. The edge of the sun shines a little through the running clouds. Motionless spruces are so high that their peaks reach far into the firmament. Strips of various shades of blue, creating a feeling of layering and depth of the sky.

The lonely figure of a walking woman is clearly visible against the white snow. Ahead slowly trotting horse drawn in a sleigh. Snow cover is almost untouched, no traces. Only evidence of the power of rural life, such as the church a little apart. The boundlessness of the expanses is expressed in the line of the horizon, stretching into the sky, where whiteness closes with dark blue.

Amazing comparison of plans – elements of antiquity on earth, almost in the foreground, and the achievement of advanced technologies in the sky, as a symbol of high goals and the pursuit of perfection. Contrast is achieved not only by diversity. The silhouette of the aircraft stands out bright spot on a gray – blue background. He does not seek to merge with the surrounding reality, but proudly pierces space. The feeling of freedom of flight of thought and imagination, the desire for height and flight as a symbol of the realization of a dream.