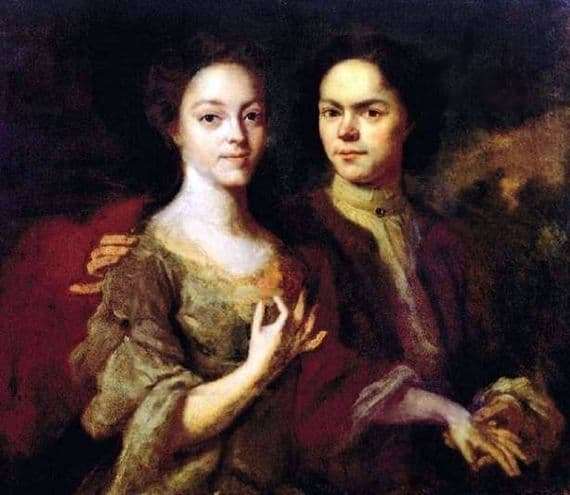 This picture for the first time in the history of Russian painting speaks openly about the feelings of the artist. Never before in our history in the works did not meet the love-lyrical theme, affecting the relationship of representatives of different genders. Matveyev naively and touchingly describes his pride in the ability to create art, for his spouse and for the love between them. The picture symbolizes all the good that can be in a person.

Both spouses are shown above the belt. The background for them is the sky, closed by clouds. It is as if this couple is walking, but for a moment she froze, as if welcoming a casual acquaintance, who is the spectator. Let both of them come from the lower strata, but they lack the stiffness and, in particular, the arrogance that is characteristic of other representatives of the nobility. Persons of two young people exude the dignity peculiar to those who were beaten “upstairs” thanks to their own talents. Their clothing, although it responds to the fashion of the time, does not shine with a special delicacy. It is simple and beautiful, as if it was created by the hands of the master himself.

The artist’s wife can captivate the viewer with the freshness of her face with a delicate blush on her cheeks and youthful skin. Her husband, by contrast, exudes the energy and courage inherent in the representatives of his generation, as well as an unsurpassed mind.

Matveyev seems to be gently hugging his spouse with one hand. He does not press on it, as evidenced by the little finger set aside, but controls the course of their movement. With the second hand, the artist gently touches the palm of his wife, also gently pointing her direction. The girl does not resist the will of her husband, at the same time confirms his feelings for him, placing his free hand closer to the heart.

Andrei Matveyev wanted to perpetuate the family idyll and happiness that were inherent in them with this work. He kept the picture until his death in his chambers.