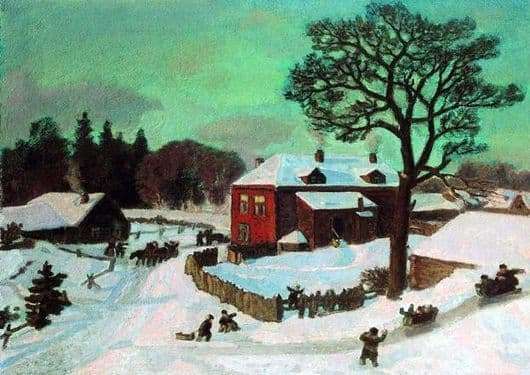 You have never noticed how the winter cover of the earth changes in the evening. It means snow. It is just when the sun is just beginning to set and its light turns pale pink and the snow is saturated with this color respectively.

On this canvas, Krymov is just one of those evenings, when it is the pink color that turns the area into something amazingly beautiful. But on the canvas is a simple genre landscape.

We see houses in the village and most likely a large two-story building is a school. Closer to us traced the hill, with which the children ride. And then, on the way, we see that the sleds are riding. In general, this is the usual rural idyll. Nothing more is needed, only peace and peace. At least, that’s what the picture says.

But there is something strange about it. Of course, first of all, it is an abundance of pink hue, then some turquoise sky with forests blackening on the horizon. And plus to this – at home with different shades of black and brown. But at the same time the canvas itself is not so vividly active. It is as if extinguished by this winter cold. By the way, it is cold, but the kids are on the street and are completely absorbed in their play. There is a feeling of coldness from this canvas, but not repulsive, but attracting to itself.

Everything would seem simple and not simple, everything is clear and yet somehow wrong. But still surprised how the artist clearly draws a large tree in the right corner. It was the only one out of the total mass of forest plantations and somehow it also looks special. And maybe there is nothing in this canvas so special and everything just seems to be.

It’s not for nothing that they say that the winter season is deceptive. This is how to know! And everyone wants to be there, on a quiet village street and just sit in a hut or on the street and just feel the silence. It is the silence that we, the inhabitants of urban slums, lack so much.