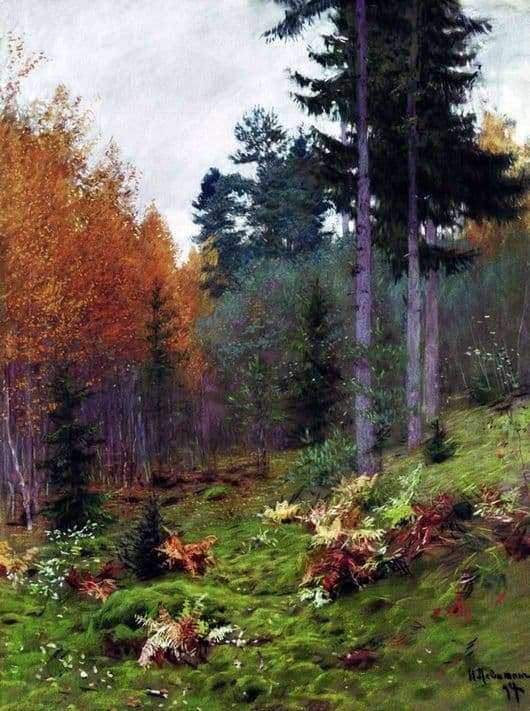 Isaac Levitan was a true master of landscapes. Most of his landscapes are called masterpieces, even the most demanding critics. In this case, Levitan not only redrawn nature, but also put his whole soul into each of his paintings. Due to this, they are all very emotional.

The painting “In the Forest in Autumn” was made using pastel colors. That is, they are not flashy, not bright, not striking. Due to this, we can imagine that we are an integral part of the picture itself. In addition, it helps to facilitate the perception of the canvas, as it is quite difficult to understand the essence of a too colorful picture.

In the picture Levitan shows that he really loved nature. With great love, he belonged to his native place, where he spent his childhood and youth, because it was at this time that all the most interesting moments happened in his life.

This canvas depicts a landscape characteristic of Russian forests. In the foreground one can see the not yet yellowed glade. This suggests that on the street so far only the beginning of autumn. Although most likely – on the street in October. This can be judged due to the fact that behind you can see a poplar, whose leaves have already become orange. Nature is slowly preparing for the onset of winter. Animals in the picture is not visible. They are now busy with other things, because soon the first frosts will appear, and by this time they still need to stock up on food for the winter.

Levitan depicted one of the days in the middle of autumn. The sun still shines, but now its rays are not as warm as before. The sky is clear, blue. So the weather is good. The artist painted a coniferous grove on his canvas. Like many other artists, Isaac loves coniferous trees, because they are characteristic of Russian nature.