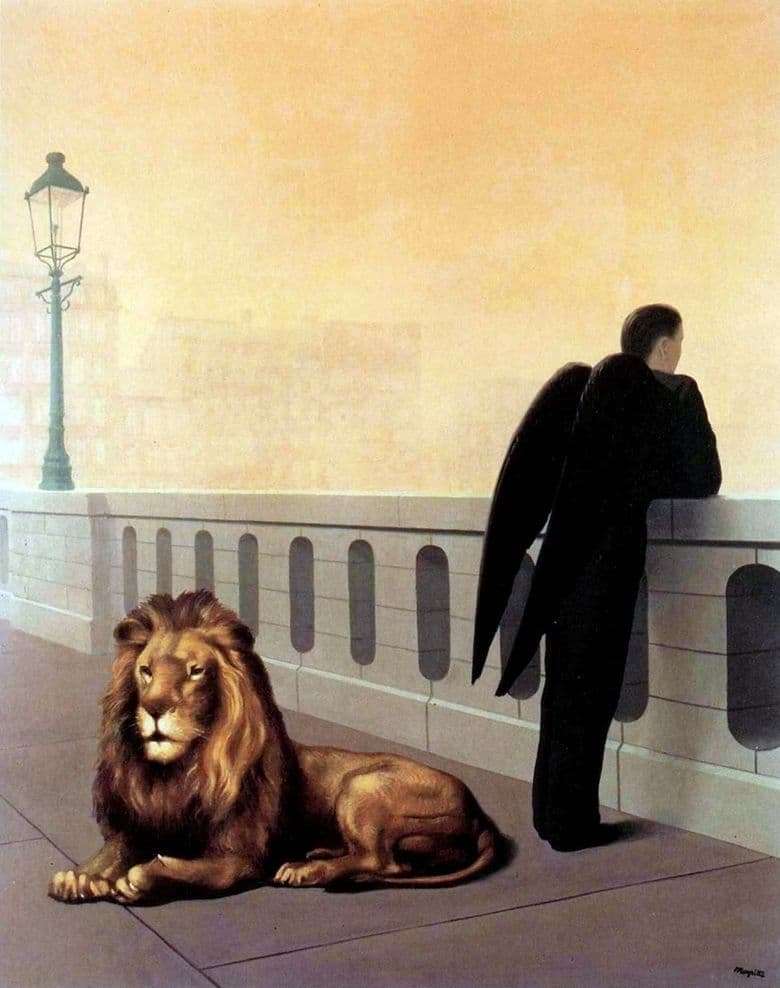 The picture is dated 1940, is stored in one of the Belgian museums.

Rene Margitt is known in artistic circles as the author of mysterious, mysterious paintings. They need to be considered for a long time and attentively in order to see the true, sometimes deeply hidden, meaning of the canvas.

The key to the “secret writing” of Margitt can be considered the words of Herbert Reed, who considered the artist to be a master of images of something non-existent, images and paintings that live only in the author’s fanciful fantasies. In fact, these are bright, clear dreams – devoid of amorphous, ambiguous features inherent to night guests.

The composition of the canvas is plain, the images are drawn clearly, the colors are bright juicy. Painting the style of the letter is very similar to the photo – so clear the lines, color.

The representative of surrealism, Margitt in the company of renowned associates in the shop stands alone.

The artist depicted a fragment of a bridge with two figures on it – a man and an animal. Neither the beginning nor the end of the bridge is visible, everything is shrouded in a pale yellow mist, through which the outlines of buildings are guessed.

The artist himself, commenting on the plot, explained that in reality a lion and a man cannot have any business on the bridge. And how can a wild animal and a man be in the same open space? It seems that the author has created a work about inescapable longing for a different, seemingly real life. This is nostalgia for a dream – hence the name of the canvas.

A person has wings, but they are folded – this, according to the artist, looks like sadness about the impossibility of achieving DREAMS. Black costume character accentuates his mood.

The face of a man with wilted wings is not visible, it is impossible to read his thoughts.

The figure of a lion on the canvas is not a random character. The artist king of animals is often present in the work. His appearance in Nostalgia is a clear allusion to the prosaic routine of everyday life. The earthly Present always displaces the ephemeral Future, “here and now” there is no place for hopes and dreams.