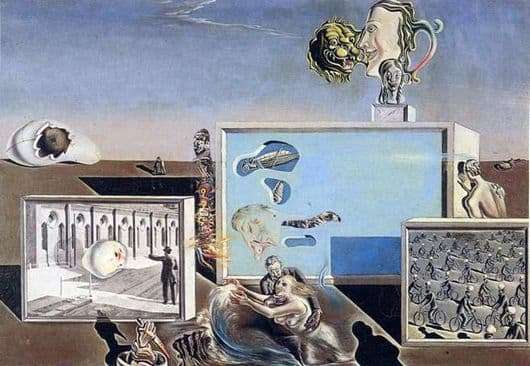 This canvas can, by right, be considered an example of miniaturism in the works of Salvador Dali. Here several plots are developed at once, and some of them are enclosed in original boxes, and some on a common field. What did the artist want to show?

Just my childhood dreams, fears, overcoming them. Here we see at least two scenes of struggle. A couple – a man and a woman – are fighting with a whirlpool, two hands are also fighting, one of which is with a bloodied knife. Who they belong to is not clear – the characters are hidden behind the bottom edge of the picture, only the idea is clear: you must stop the killer.

Wasn’t his victim the hero of one of the paintings in a box with his eyes closed and blood leaking from his nose? A huge, detailed locust is shown above the fallen head.

In the right box there is a calmer plot: cyclists compete, which of them will be able to drive longer, keeping a similarity of cotton candy on their heads. There are so many that it seems as if they are about to bump into each other.

In the left box – again aggression, there the man is going to make another shot at an incomprehensible target, which moves along the house. What is this lump? Perhaps this is an invading alien creature.

Above, already without any box, right on the horizon line in the desert lies a similar block, in which there is a hole with torn edges. In this hole one can see something resembling a baked apple. A little to the right – a couple of people, obviously not dancing, but fighting.

Only the sky and clouds seem real in this picture, the rest is revived fears and dreams. Even instead of the sun in the sky – the head of an angry lion, face to face faced with the smiling face of a man. Nevertheless, the harmoniously constructed composition allows to perceive the canvas as a holistic artistic image.