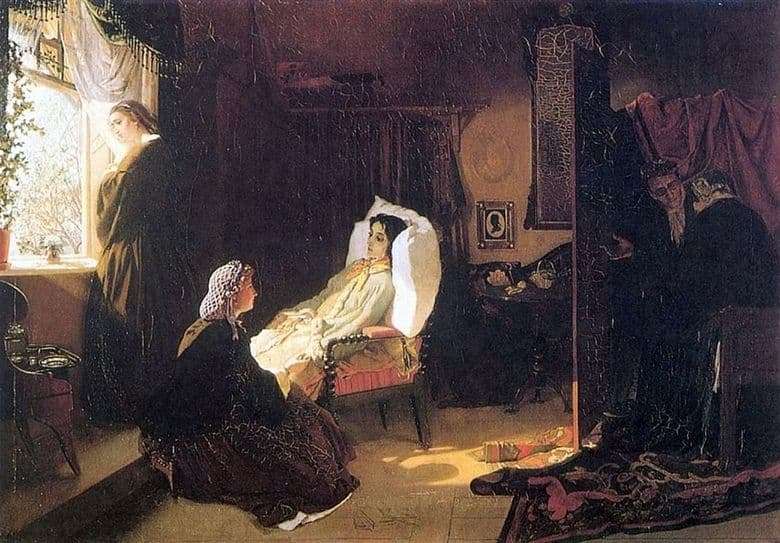 In the artist’s picture in a sentimental vein, the motive of sympathy for human tragedy is affected. For this canvas, Clodt received a large gold medal. The atmosphere of genuine care, sadness and affection for the fading girl that prevails on the canvas is depicted without theatricality, albeit with a touch of sensitivity. The figurative language of the painting includes a mass of traditional elements characteristic of the 40s and 50s. However, new qualities are clearly slipping, felt in the painter’s painter to recreate the dazzling atmosphere of the room.

People depicted in the picture are perceived as dolls or phantoms, and only the image of a patient illuminated by the sun looks real. This is materially emphasized by verdant vegetation and warm weather outside the window. Doomed girl half sitting in a chair, leaning on a pillow under her head, shading the pallor of the face and the whiteness of home clothes in contrast to black hair. The artist managed to beautifully convey the weakness of the patient, her hopelessness, expressing this with the help of his arms, limply stretched along the body. The look is sad, but peaceful – she realizes that for the last time she sees the coming of spring.

Next to the dying girl is sitting, without taking her eyes off her, a sister whose face is illuminated with rays. She is probably trying to distract the sick from dark thoughts. The second sister is standing near the window, all illuminated by a blinding light that helps to hide tears. The color of the canvas is quite dark, a lot of purple and olive, but the focus is just two bright spots: the window and the chair with the girl.

From the right edge of the canvas behind the partition, two elderly people are whispering, probably the mother in an old-fashioned cap, pictured with her back to the viewer, and the doctor, who has anxiety on her face, and a hand shot up in a gesture, as if saying that she can no longer help. All details are drawn on the canvas, ranging from the elements of the characters’ clothes to the decor of the room: a portrait on the wall, baskets with needlework on the table, a black and lilac rug thrown on the floor, a tray with metal utensils on a chair next to the window. The author of the picture in one of his best works expresses compassion and participation to human misfortune.