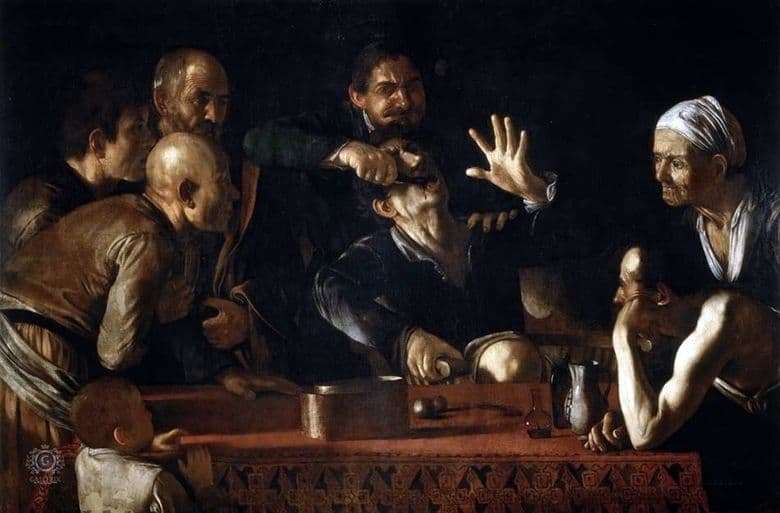 In the XVII – XVIII centuries, the art of genre scenes became widespread in art, making it possible to capture images of people participating in curious angles, outlining the diverse experiences of heroes. Caravaggio himself made a significant contribution to the formation of European household painting, using appropriate content, as well as taking the role of sitters to write his subjects for people of simple rank. Perhaps the picture is the latest created in Florence.

Some art critics contested the authorship of the picture, despite the fact that its style and practice of using motifs are inherent in his work. The canvas presents a fragment from the life of commoners, filled with the manifestation of uncontrollably harsh experiences, which was not typical for Caravaggio, as well as defiantly reduced, overtly genre content. The treatment of images torn from the darkness is acutely dramatic. The color of the canvas is dark.

On the canvas depicts an unusual scene: a table in a tavern, behind which there are several people. The center of the composition is an image of a tooth extraction operation in medieval conditions to a patient who threw up one hand while the other is trying to hold on to the handle of the chair. A stream of blood flows out of his mouth, his mouth gaping in a scream. The doctor stands behind him, one hand holding the patient by the shoulder, and the other firmly grasping the instrument with which he pulls out the inconvenient tooth. The physician acts with effort, his face directed at the viewer is twisted with a grimace of zeal, his eyes intense.

From the left side of the picture, a group of witnesses to ill-treatment curiously watches what is happening, experiencing both confusion and compassion. A small child clutched at the edge of the table with his hands, but he could not tear himself away from the sight of the sufferer’s merciless torment. An elderly woman with a tied head, sitting at the table on the right, stood up in a restless estate, intensely watching the procedure, and with her half-naked man leaning on her arm, lying on the tabletop, sat indifferently: nothing could hit him. The master has remarkably revealed the characters of his characters, each of which reacts differently to the procedure that delivers torment to a person.