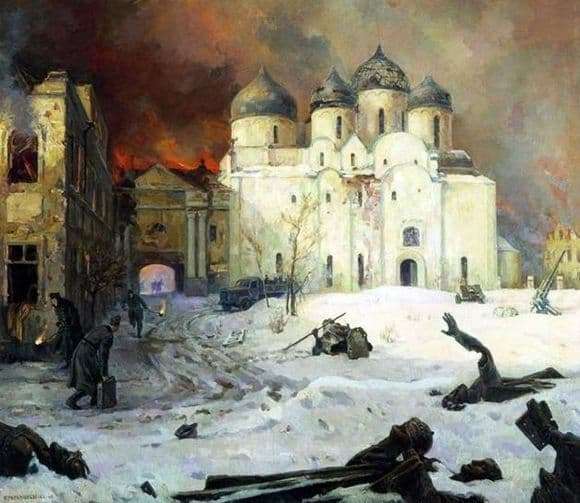 Kukryniksy is a pseudonym for connecting three painters. The name is composed of the initial syllables of the names of Mikhail Kupriyanov and Porfiriy Krylov, including the capital letters of the name and surname of Nikolai Sokolov.

Artists worked together, but each was characterized by its own creative individuality. Kupriyanov, for example, worked a lot on landscapes, Krylov painted portraits and picturesque panoramas of Europe, and Sokolov with touching tenderness wrote out the beauty of nature of his native places and everyday scenes of Moscow life. The creative trio gained fame thanks to numerous caricatures, among which were a series of book illustrations, political cartoons, agitation and anti-Nazi posters and leaflets. Kukryniksy, by right, were classics of political caricature; in particular, they created several paintings and pastel drawings dedicated to the Patriotic War.

One of the best pictures is “The Flight of the Germans from Novgorod”. The authors truthfully and vividly portrayed the city in January 1944. Having arrived in the liberated city, Kukryniksy saw with their own eyes a terrible picture of vandalist destruction, which they would then deliberately and clearly transfer onto the canvas. The picture was inspired, on the one hand, by the hatred of the enemy, and on the other, by the love of the Motherland and the praise of Soviet patriotism.

It is noteworthy that the central figures are not people, but unshakable creations of Russian architecture. The majestic St. Sophia Cathedral, whose walls and domes are dotted with potholes, proudly shines behind the backs of the retreating Germans. Enemies in panic rush about with torches in their hands, cowardly setting fire to debris, in an attempt to stop the advance of Soviet soldiers. In the snow, the fragments of the “Millennium of Russia” monument scattered about are mercilessly and purposefully sawn by fascists scattered around. One of the bronze figures with an outstretched hand is brought to the fore, appealing for vengeance.

National shrines, thus, embody the strength and invincibility of the Russian people. Illuminated by the warm rays of the sun, the cathedral simultaneously combines the tragedy and grandeur of the cultural heritage. Despite the glimmers of fire in the background, clouds of smoke move toward the fleeing enemy. The walls of the cathedral are snow-white and shine, and beyond its walls the sky that brightens from the clubs of the fires brightens. The overall tension and drama of the plot is conveyed by color contrasts and sacred symbols in the images of the canvas, thereby enhancing its emotional sound.

Complex original composition along with the relevance of the plot and ideological content attract and make clear the picture for all generations. Deeply patriotic and folk art has made this work of Kukryniks one of the most significant works of wartime.