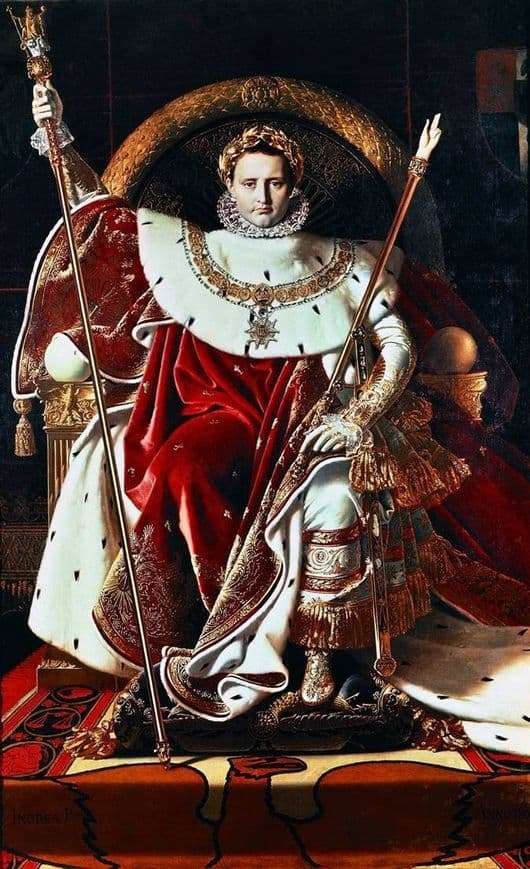 Ingre painted the oil painting “Napoleon on the imperial throne” in 1806 in the neoclassical style by order of Emperor Napoleon I.

In this work, this ruler sits on his throne in the usual position in which the god Jupiter is usually found, the emblem of the eagle woven on the carpet by skilled craftsmen.

Closer to the edge of which there are signs of the zodiac, indicating that this god served the role of the heavenly king. Napoleon is dressed in regalia, his head is crowned with a laurel wreath, in his hand a scepter, a rod of the judge (which meant justice), the sword of Charlemagne. The figure of the ruler is very similar to his portrait.

Contemporaries, when they saw the picture, realized that Ingres made the ruler look like this god and the famous figure of God from the Ghent altar (approximately 1432), which was brought to the French capital along with military trophies.

It is unclear whether this picture was commissioned by Napoleon, or whether it was painted by Engrom to be recognized as an artist, but when it was exhibited, it was heavily criticized.

According to some people, the figure in this portrait is not very similar to Napoleon, the pictorial style is out of fashion, and the image of this ruler seemed inappropriate for those who wanted to see the sovereign as a democratic ruler and people’s favorite. The artist was very upset by this misunderstanding.

The emperor stubbornly sought to success, which was reflected in the painting, which was ordered by him, and where his power and authority were clearly reflected.

When the revolution in France ended, at the end of the 18th century, Napoleon was able to attain the highest authority in the state and establish a military dictatorship. He ruled the country from 1804 to 1815.

In some of the paintings in which he was depicted, elements of Renaissance painting, the style of artists working at court and creating portraits are visible.