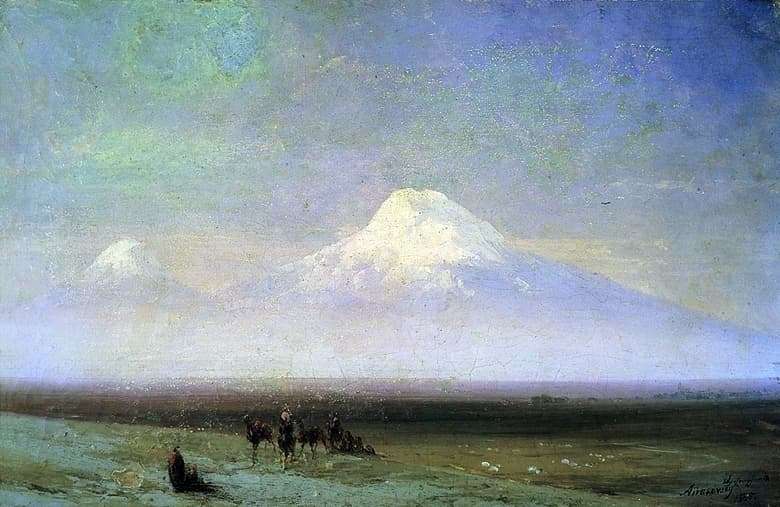 Year of creation – 1885, materials: oil, canvas; Dimensions: 23 by 34 cm. Belongs to the Museum of the Armenian Congregation Mkhitaristov, Venice, Italy.

The hill, in whose honor the painting is named, is today in Turkey. However, at the time of the artist she belonged to Armenia and still remains one of the main symbols of this country, depicted on the state emblem. Aivazovsky loved to write the nature of the Eastern state, but this amazing place appears in more than ten of his works.

Ararat is a biblical rock, revered by Christians, because it is believed that the Old Testament Noah’s Ark moored here after the global flood, in which the righteous and animals were saved. In addition to the mention in the Bible, many ancient Persian and Armenian myths are associated with the Ararat mountains. According to one legend, it was here that Noah once broke a vineyard, which subsequently gave people delicious berries and wine.

The canvas, despite the horizon lost in a light lilac haze, is clearly divided into two parts. Big and Small Ararat stand proudly on the top. They are drawn with very soft strokes of translucent blue and violet and almost merge with the sky. Only the snow-white hats at the top represent a stronger contrast. Due to such a reception, the silhouettes, which are poorly discernible at the foot, as if they acquire materiality to the peaks and hover in the air.

The second half of the landscape literally returns the viewer from heaven to earth with her worries. On a wagging road in the plain, which begins to climb higher to the foreground, there is a caravan. You can distinguish the graceful outlines of camels, their drivers in the characteristic white fur hats on their heads, made of sheep skins. More dark shades of dark green, marsh, myrtle, ocher-brown prevail here…