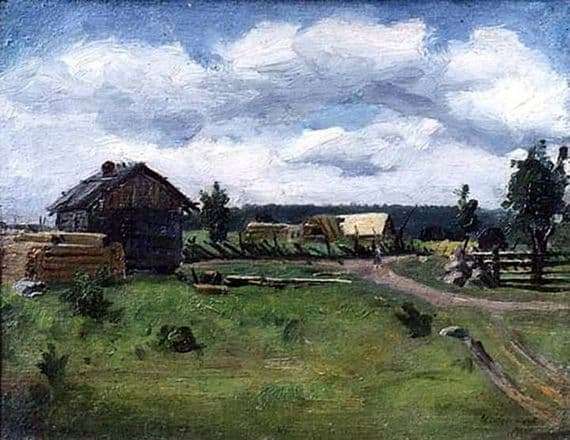 Levitan is the most Russian of Russian artists, a singer of earth and sky, conveying the inner state of the soul with paintings and believing that the greatest beauty is hidden in nature. Despite the miserable childhood and hungry youth, he did not lose the ability to see the beautiful – the right eye, the exact hand, attention to detail and the ability to see beauty where it was not given to anyone else could have made him great.

“Cloudy Day” is one of his landscapes – and Levitan painted landscapes exclusively, as if concentrating on the only thing that deserves his attention. He depicts a simple village – several houses, a well-built log cabin, small fences and trodden paths, which from the first rain will crawl into wet porridge.

Trees swaying from the wind, touching the branches with the sky, in the distance you can see a forest that, like a wall, separates the tiny settlement from the rest of the world. The sky is covered with clouds, not even a glimpse of the sun is visible. It hangs low above the ground, laid with generous broad strokes, and in the evening, probably, it rains. Like a wet blanket, it covers the ground.

A man walks along the road – his figure is planned to be fluently, barely, with a couple of strokes, as if for an artist he was no more than part of the landscape, like a leaf or peg in a fence, as if he were only a natural part of the world and there was no need to pay him too much attention. People in the pictures of Levitan appear only in this position – they exist, they are planned lively and simply, but attention is not focused on them. They are part, not the best and not the worst.

The village is waiting for rain to fall. All of it seems extinct, frozen in this expectation – so a person sometimes waits for trouble, knowing that it will happen without having any way to take it aside.

Anxious waiting – this is the main mood, which conveys this picture.