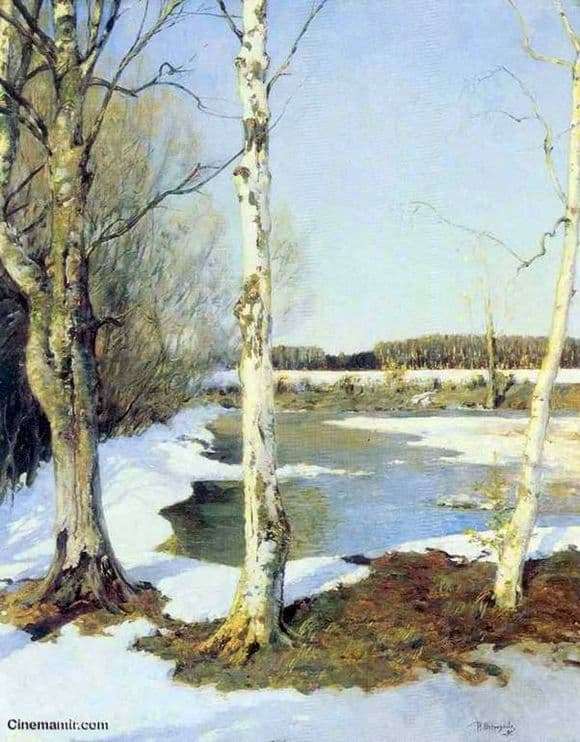 One of the favorite areas of painting Ostroukhova always been the transitional state of nature. He sought to catch and convey through paints and paper the very, almost inaudible, changes in nature that transform the world around. One of such canvases is “Early Spring”. The painting was painted at the end of the nineteenth century.

The landscape seems to be filled with fresh spring smell, it seems incredibly clean and airy. A color scheme is built on the contrast. After all, spring is something between a white snow drift and lush green grass. Already in the foreground, we see how the pure white snow contrasts with last year’s withered grass. Fresh young greens also make their way there. It was not by chance that graceful birch trees appeared in the foreground. Their crown is also written in contrast: white and faded green. On one of them you can see a branch with young leaves.

The snow on the bank seems completely untouched, but there is a clear border between it and the river itself. Despite the small amount of shades used, the picture is literally filled with brightness due to the fact that all colors contrast with each other. The forest in the background is written in strokes in a combination of gray-green and white shades. Only the branches of still bare trees misty merge into a clear blue sky.

The nature in this picture as if awakens, throws snowdrifts off of itself, comes out of hibernation and comes to life with a new life. And all this sharpness at the same time combined with some kind of tenderness and ease. Probably, this is exactly what Ostroukhov wanted to convey on his “Early Spring” canvas.