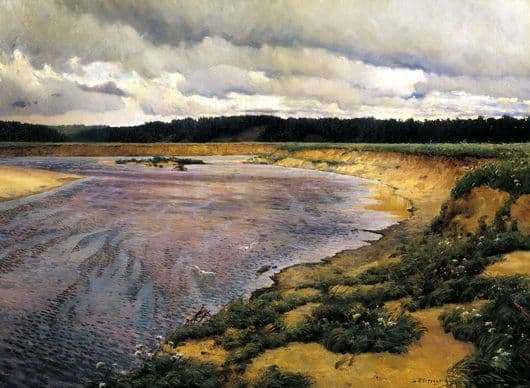 The canvas belongs to the famous Russian artist Ilya Ostroukhov. The painting was painted in 1890. The full size of the canvas is 85×119 cm. The artwork is made with the help of oil paints. In our time, the canvas can be seen in the State Tretyakov Gallery in Moscow.

After the picture was completed by the author, it was purchased by Pavel Tretyakov. In his collection were already the work of Ostroukhova, however, this canvas Tretyakov was most proud of. In 1891, the painting “Siverko” was first presented to the public at an exhibition that took place in St. Petersburg.

On the canvas the artist depicted an elegant river bend. Thanks to the picturesque Russian nature Ostroukhov was where to draw inspiration. After all, the Russian land is rich in such landscapes. In the foreground is a river carrying its blue waters far into the distance. In some places you can notice the still water surface in which the sky is miraculously reflected. A little later, the Siverko begins to blow – a cool north wind, breaking the fixed mirror of water. The river is painted in dark colors. Shades of violet and blue, in some places black colors prevail. Among the water ripples is guessed island – a tiny piece of land, which is covered with green grass. The viewer may notice two gulls quite low above the water.

The deep river divides the land into two banks. One of them is sandy with a gentle descent, and the second, which occupies a significant part of the picture, is steep and overgrown with shrubs. On this side, the breath of the cold siverk is especially clearly felt. Thickets on the shore seemed to have become obedient and obeyed the will of the wind. The grass bowed under his gusts.

The sky is painted in gray-blue tones. Clouds under their weight float low above the horizon. A premonition of an impending storm is created. At the same time, the viewer feels ambiguous feelings of anxiety and admiration for the power of beautiful nature.