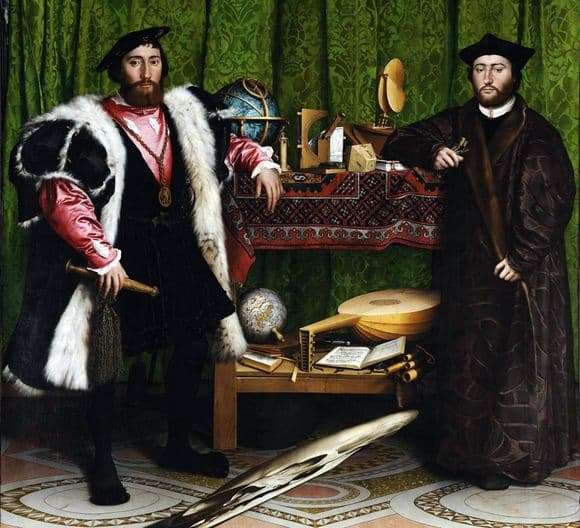 Holbein is one of the greatest German artists who created his own style in painting, preferring portraits and genre scenes. His “Ambassadors” is a picture showing two people frozen at a table littered with trifles. Here and lute, and the open book, and the book, laid the fabric tab, and the globe, and scrolls, and a candle. – a full set of interests inherent in people educated and comprehensively developed.

Ambassadors look at the frame, one of them is dressed in a semblance of a black mantle, on his head is a square black cap. In his hand, he holds a compass and looks at the viewer calmly, as if inviting him to take part in some kind of scientific debate. The second is dressed richer and more magnificent, but the cap on it is the same – these people are intellectuals of their time, carrying education and life. They pose without tension, as if they are written every day for posterity, and they are completely satisfied with their life, honoring themselves as sensible, reasonable and positive people.

However, from the overall composition of the picture is very knocked one item. If you look at it directly, it seems to be a vague and lurid spot put on a picture. God knows why. But as soon as you bow your head, look at it, it becomes clear that this is a human skull, grinning with an eternal bone grin of death.

“Memento mori”, as if the artist says to anyone who looks at the picture. Remember about death, remember that she is always there. A person does not think about it, perceives it as something alien to life, superfluous, coarse, put into an earthly existence for fun, something that can be ignored. However, death is always near. One has only to bow his head, to think – and now, it will become clear how close she is at every instant.

No matter how enlightened you are, no matter how sensible you are, you are always waiting for you and always glad to see you.

And she always laughs last.