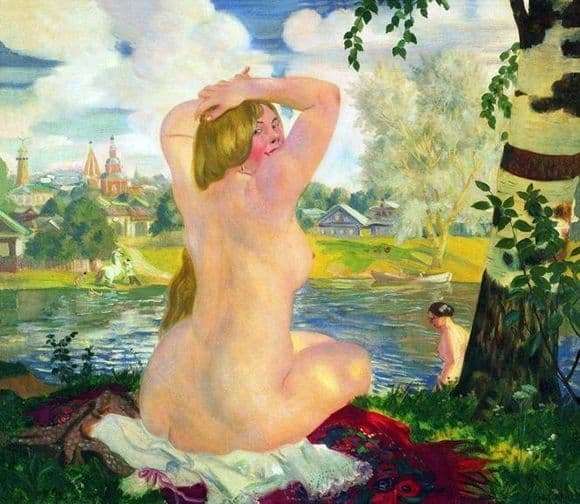 Boris Kustodiev – Russian Rubens of his time. In his works, the artist glorified female beauty in all its manifestations. The images of B. Kustodiev were captured by the magnificent merchants, naked Russian beauties.

Many criticized his works, however, sneaking admiring the color and color of his paintings.

B. Kustodiev was faithful to the traditions of Russian realists, depicting simple plots with understandable images. He did not care about the conviction in violation of traditions and tendencies. He was fascinated by Russian popular popular print and was inspired by the ideals of beauty, far from the perfection that society demanded.

We can say that his paintings are echoes and longings for another “non-existent” Russia. This fabulous and epochal country, where, in his understanding, it is full-bodied women symbolize the harmony and comfort of the Russian world.

The type of such a woman

is vividly reflected in the 1921 Bather.

In the center of the plot attention is riveted to the figure of the maiden, as if taken aback at the moment of bathing. The golden braid slung over her shoulder, pink and warm orange tones of the girls’ charms are open to admire.

The pose itself, in which the bather is captured, is designed to demonstrate the natural beauty and attractiveness of the young body. The girl’s face is as if copied from the heroines of folk tales and fairy tales – a light blush, high eyebrow arches, a chiseled nose, rich cherry lips. Against the background of the surrounding nature, the bather looks organically and aesthetically. Natural and incredibly attractive, alluring and tempting.

The authentic standard of Russian beauty is surrounded by the delightful beauty and symbolism of native lands. A typical rural landscape on the nearby shore, a birch that harbors a beautiful nymph in its shadow. The richness of the female body and the surrounding nature are woven into each other, creating an unusually warm and picturesque picture.