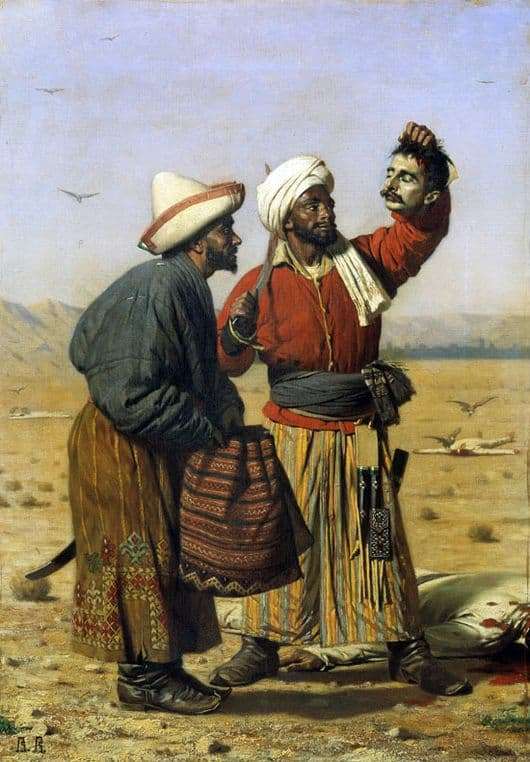 Vereshchagin was twice in Central Asia, which inspired him to write the Turkestan series of paintings. The artist in the East was struck and shocked by everything: from the beauty of human hearts and the amazing things created by the hands of people to the cruelty and indifference of the surrounding world.

In many paintings of Vereshchagin, the elegance of architecture and, as a contrast to this, beggars on the characters are seen.

Art lovers of Turkestan accepted ambiguously. Habitual Vereshchaginsky landscapes were replaced by bloody military cruelty, which abounded in new plot compositions. Heads, cut from the shoulders, taken as a trophy of a won victory, have a horrific effect on each observer.

“After good luck” is a vivid example of the military Turkestan theme of Vereshchagin, which depicts the soulless thugs of Asia, assessing the head of a white man, separated from the bloody clogged body.

Benoit, a famous critic and art historian, appreciating the artist’s work in general and the painting “After Luck” in particular, agreed with those who were outraged by Americanism and the “bad painting” of a person who “cannot be called an artist”. However, he also characterizes Vereshchagin as a disinterested, tireless and devoted personality.

For many, the military creativity of Vereshchagin remained incomprehensible. I was struck by the color palette, but at the same time, it also took the form of color patches against the background of the alienity of the paintings.

Kramskoy was one of the few who admiring the paintings of Vereshchagin, called the author “the great Russian”, raising the Russian spirit and forcing the hearts to beat proudly. He not only openly admired the artist’s work, but also considered the success of the Turkestan series to be enormous, called for making it public, and strongly advocated the enormity of the author’s talent.