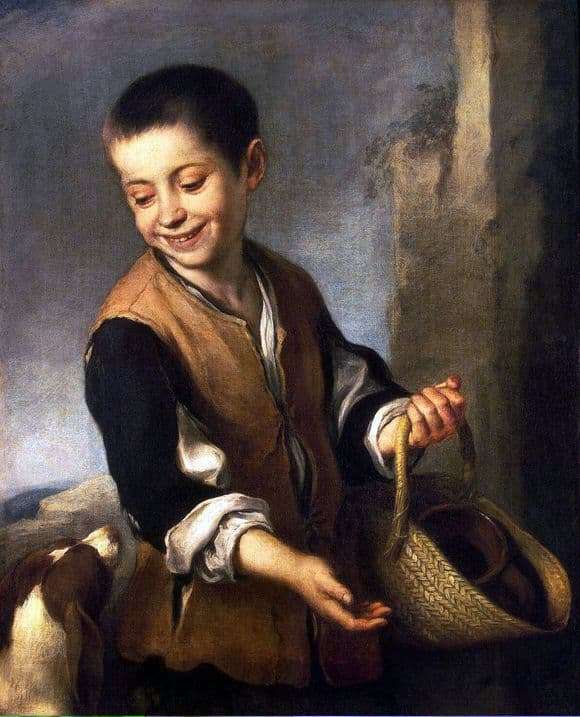 Bartolome Murillo was considered the best master in Spain during the 17th century. His paintings were very popular. Once he was even invited to become the main artist in the Seville Monastery.

Murillo portrayed on his canvases, both religious scenes and ordinary everyday scenes. But most of all he loved to draw children. These were paintings showing the usual everyday scene in which one or even two children were present. It happened that the master and three children at once. Especially popular is his painting “Boy with a Dog”.

The artist did not seek to idealize their characters. He painted them as they are. The boy is depicted in the picture in his peasant clothes. Simple poor look. He has a thin face pointing down. It is evident that the child is poorly fed, but this does not affect his cheerfulness. Or vice versa – the situation of his affairs is nowhere worse, but the dog manages to amuse the child.

In the boy’s hand is a basket in which the pots lie. Apparently, he was going to carry them somewhere, but the dog detained the youth. And he decided to stop to play a little with her.

The dog has no breed, and most likely it’s just a stray dog ​​that accidentally wandered into the room. Although the vague background does not give an exact idea of ​​where the boy is. Maybe this storage room, or maybe it is just located on the street where gloomy weather prevails.

The face of the child is made in the best traditions of the artist. He displayed a slight redness of the eyes of a child, which is characteristic of either chronic fatigue or morbidity. However, this does not harm the attractiveness of the child. Brightly executed elements of his clothes immediately catch the eye so that you do not immediately notice the second character of the picture – the dog.