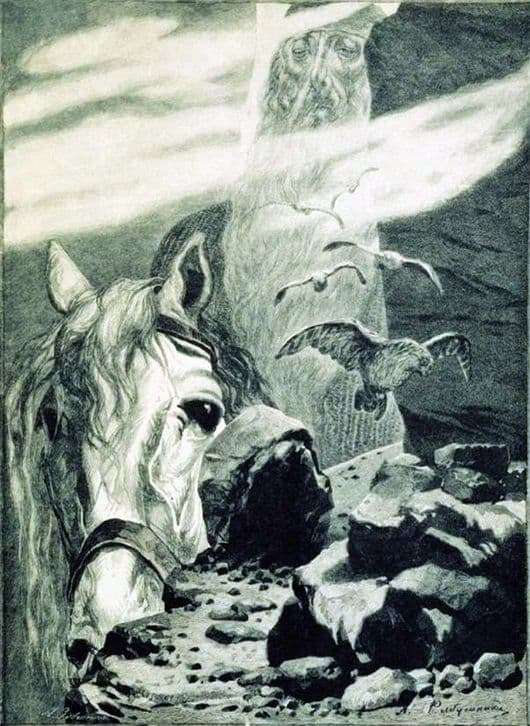 Here it is worth telling at once about two personalities. First, about the mythical character Svatress, and then about the author of this canvas Ryabushkin.

As for Svyatogor, this purely epic Russian character was outside the Slavic epics. The strongest of the heroes and the highest. He is a giant giant and keeper of the Russian land from enemies. It was he who gave his strength strong to another famous hero Ilya of Murom. So to say, he handed over his post to him and he began to keep the Russian land, as he did.

On the canvas, the artist did not draw a giant, but simply depicted at close range the face of a horse and the Holy One itself on it. And it seems that the giant is riding on the ground, bypassing the mountains, boulders. Birds fly past, animals run past and no one even tries to contradict Saints.

And this canvas was depicted by Andrei Ryabushkin. Fate so ordered that gave him only forty-two years of life. But over the years, he managed to create such canvases that we have known since childhood. Yes, yes, it is his paintings adorn the textbooks on the history of Russia. Because he portrayed historical subjects.

Quite often at the end of the nineteenth century in various historical journals in St. Petersburg, often articles were accompanied by his illustrations, which were simply amazing and most accurately conveyed the spirit of a particular era. Where does such exact knowledge come from? At one time he traveled through all the ancient Russian cities of Central Russia and sketched out the details of everyday life, frescoes, and landscapes. But at the very end of his life, he became interested in Russian mythology and began to illustrate these myths. Here is the “Svyatogor” from the very collection.

A terrible disease killed the artist, but he was engaged in his work until the last days – drawing. The artist’s canvases are now stored in the Russian Museum and the Tretyakov Gallery. So you can see his creations there, and not on the pages of textbooks.